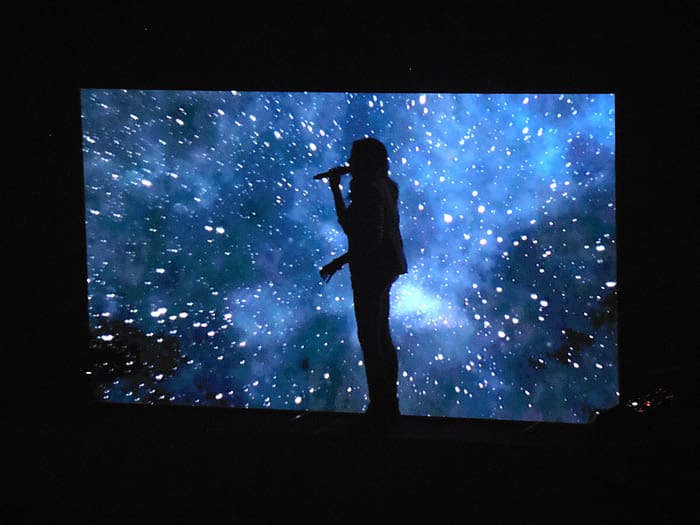 After attending the If We’re Honest Tour on the campus of Davis and Elkins College on Saturday, October 25th, wow sums it up!

The evening started with us making our way into the lobby of the Harper-McNeely Auditorium to find Jon Bauer, one of the evenings performers, finalizing the merchandise at his booth.

Earlier on Saturday, Jon had re-tweeted our ICYMI Twitter post about the event, so we wanted to thank him and introduce ourselves. In the process we picked up his album, Roots of Worship. The album covers some of the most beloved worship songs including “Forever Reign”, “Whom Shall I Fear”, “Our God”, and “Amazing Grace”.

Jon is an accomplished International Worship Artist having 12 Canadian radio hits, with six Top 5 singles and a No. 1 single. He has 30 GMA Covenant Award nominations including “Male Vocalist of the Year” from the Gospel Music Association. As mentioned, his album Forevermore, was awarded the 2012 GMA Canada “Praise and Worship Album of the Year”. The 2009 album, Giver of Grace – Kids of Worship: Vol. 1, received two GMA Covenant Awards; one for “Children’s Song of the Year”, and one for “Children’s Album of the Year”.

After finding our seats we waited in anticipation for the line-up. First to perform was Jon Bauer. His enthusiasm and love of Christ was met with his talent as a singer and worship leader. Bringing the audience to its feet, he commanded the stage and gave a heartfelt, inspirational performance of songs. One of them being “Blessed Be The Name – Power In The Blood” from his newest album Roots Of Worship. His set roused the crowd and set the stage for a wonderful evening of praise and worship.

The excitement grew as the crowd waited for the next performers, Sanctus Real, a Christian rock band from Toledo, Ohio. Being together for 18 years, the group touts eight #1 songs, seven top 5 singles, two Grammy nominations, and album sales of more than 700k units. Sanctus hit the stage and performed a string of number one singles like “Lead Me”, “Forgiven”, and “Pray”. With each song the bar was set a little higher.

A quick change in energy was felt half-way in the set for the band. Lead singer Matt Hammitt changed up the song list and added his haunting ballad “All Of Me”. Before the show Matt was introduced to a fan named LeAnne that was suffering from brain cancer. She had expressed to them how much the song meant to her. Her husband is stationed overseas and each night he sings the song to her, not knowing if it will be the last. Hammitt and most in the crowd were fighting back tears as he played his guitar under the spot light…just for her. It was truly amazing to see the power of a song and how it can heal and give hope in the face of something so insurmountable.

Matt and the band, Chris Rohman, Mark Graalman, Jake Rye, and Seth Huff, delivered award-winning performances throughout the evening.  The crowd stood singing “Lay It Down”, their first single from their new album The Dream, which is sure to be another hit for the group. Using the hashtag #thedreamisYou, the band is making their fans a part of their website www.thedreamisyou.com. You can share a photo or description of your dream and have it post on the ‘dream wall’.

Jon returned to the stage before intermission to passionately inform the crowd about a charity that is close to his heart, Compassion International. Jon and his wife sponsor twelve children and have traveled to the Dominican Republic to visit some of them.

Compassion International is a child advocacy ministry, founded by Rev. Everett Swanson in 1952, that provides food, shelter, education, health care, and Christian counseling, and are currently in 26 countries world-wide. Their mission statement is: In response to the Great Commission, Compassion International exists as an advocate for children, to release them from their spiritual, economic, social, and physical poverty and enable them to become responsible and fulfilled Christian adults. For more information visit their site: http://www.compassion.com.

After intermission, headliner Francesca Battistelli, a GRAMMY® nominated artist and 42nd Annual Dove Awards‘ “Artist of the Year” and “Female Vocalist of the Year” took the stage. The amount of passion and anointing emanating from the stage overtook the crowd as they cheered and sang along to each song.

She played hits from her debut album My Paper Heart including “Free To Be Me”, “It’s Your Life”, and an unforgettable performance of “Beautiful Beautiful” that began with only her shadow and a backdrop of the universe passing by.

Francesca performed a selection from her follow-up album Hundred More Years, including the debut single “This Is The Stuff”. The upbeat, catchy tempo, brought smiles to everyone’s face as they instantly knew from the first note what the song was.

Her latest collection of work on her third studio album, If We’re Honest, shows off her talent as a singer/songwriter with an abundance of faith, spirituality, love, and discipleship. She performed the hits “Write Your Story” and “Unusual” and was greeted with copious cheers as she started “He Knows My Name”, which sits at the number 3 spot on the Billboard Christian Airplay chart. See behind the song here.

Battistelli ended her set and closed out the event with what she said was the song that meant the most to her on the album, “If We’re Honest”. With just a piano and a lamp, her voice filled the room as lyrics were displayed on the wall behind her. The overall effect was very memorable and the overall feeling was one of everlasting mercy that is available to us all.

The new video for her song, “He Knows My Name” will be available for view on Tuesday, October 28th. We will link to it as soon as it is up.