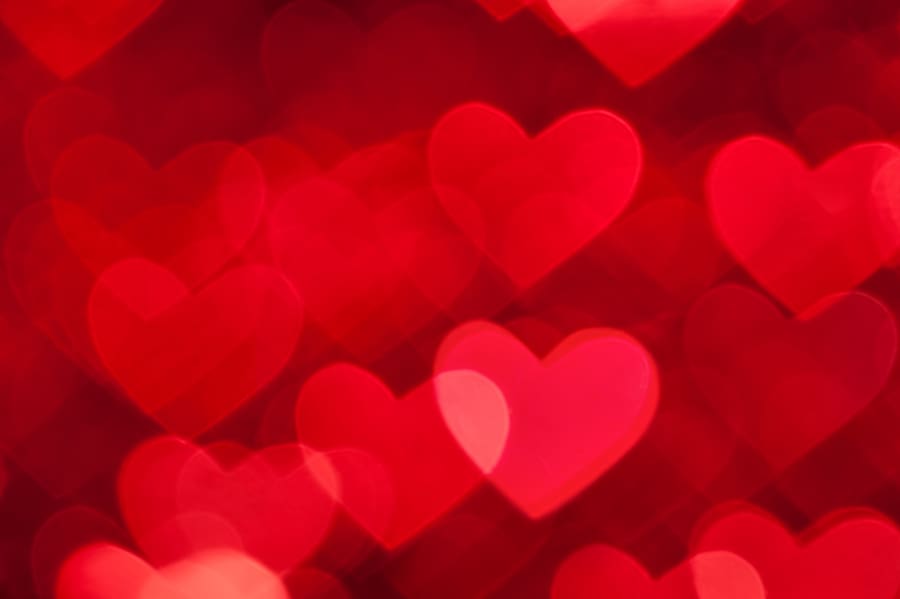 With Saint Valentine’s Day fast approaching, the color of red is everywhere. From cards, teddy bears, and chocolates, to flowers, t-shirts, and mugs, red embellishes them all in a variety of hues. The word “Love” adorns necklaces and bracelets in all their rhinestone beauty. Valentine’s Day is always full of sparkle and colored with red, but have you ever thought of why the color red for love? Here are a few thoughts on why love is associated with red.

Red is not just a color on the color wheel. Red represents love on many different levels. Take for instance, the word Adam, the name of the first man. Tracing it back in the original Hebrew language you will find it means “to be red,” or “ruddy.” So, God made man, loved him, and named him with the color red.

Noah was righteous in a time when men were constantly intent on wickedness in their thoughts and in their hearts. God saved him, his family, and all the animals, establishing a covenant with him, every living creature, and future generations, to save those who were righteous. After the flood, God remembered Noah and those with him on the ark. He made the wind blow and the water subside. God spoke to Noah and told him to leave the ark with all onboard: go forth–be fruitful and multiply. What was the first thing Noah did once they were off the ark? He built an altar for the Lord and offered burnt offerings to Him. God smelled the aroma and said to Himself, “…I will never again curse the ground on account of man…” (Genesis 8:21). God gave him every thing that moves on the earth for food, but Noah was not to eat anything with its “life-blood” in it and was not to spill the blood of another man. God placed the rainbow in the clouds as a sign of his covenant with Noah and every living creature (see Genesis 9). Blood is life, red to our sight, and God made it known that it was precious to Him.

In Exodus 4, God gives Moses the sign of turning water from the Nile into blood as the last sign to use to convince the Israelites that he was called by the one true God. The Israelites would have known the significance of the sign.

Red has through the ages also been associated with evil, the opposite of love, or a sign of death when shed.  Seth was an Egyptian god who portrayed evil, believed to be the devil by some, and was also known as the god of chaos. In the ancient world he was associated with the color red, had a face like an aardvark with horns, and the body of a man. Satan is also portrayed as clad in all red even today.

In Exodus 7, Pharaoh’s heart was stubborn and God told Moses to go to the bank of the Nile, stretch out his staff and say His words, “By this you shall know I am the Lord…the Nile…will be turned to blood.” The water became foul and undrinkable–death.

Now some more good reasons red is for love.

In Exodus 12, the Lord had Moses instruct the Israelites to kill a lamb, roast all of it by fire, and take the blood and place it on the two door posts and lintel of the houses they were eating in. God would exact judgement against the land of Egypt and kill all of the firstborn of man and beast. The blood of the lamb on the doors was a covering for those whom God had chosen, and also showed His love and protection of His people.

In the Bible, animal sacrifice, shedding the blood of an animal on the altar, was to cover sins and for the forgiveness of sins. The ultimate sacrifice, a sacrifice of complete love, was the shedding of the blood of God’s only Son, our Lord and Savior Jesus Christ. God gave the most precious gift of Grace through His Son who died and rose again bringing the Holy Spirit as an ever-present help in times of need. Jesus, being perfect in an imperfect world, was well equipped to gain total victory over all darkness and has redeemed those who believe.

“For God so loved the world, that He gave His only begotten Son, that whosoever believeth in Him should not perish, but have everlasting life” John 3:16.

The color red embodies love and is completely woven in our history. From the creation of man out of the red dirt to Jesus, whose blood was given for us–cleansing us as white as snow. We have been given the opportunity to choose good or evil, life or death, and the color red allows us to see that even though it is one color, chosen by God to name His creation, each person has the free will to choose their path in life: a life choosing love or a life choosing hate. Choose love.