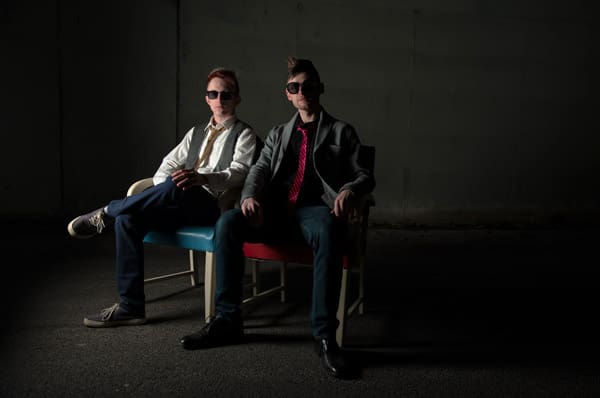 With a new name and a new direction, Spoken For is set to make a mark in contemporary Christian music in a meaningful way. Corey Brooks and T. K. King have both been involved in music for most of their lives. Corey has performed as a solo artist since an early age and is a seasoned performer while T. K. has been making first-class music and performing in bands throughout his high school and college days. The two first met when Corey was on tour in T. K.’s home state of Tennessee.

Corey grew up in Raleigh County, WV, and graduated from Liberty High School in 2007. At age 13 he was signed as a solo artist and started a successful career that garnered a number one single in the US and overseas with “Love Me Anyway.” The popular song was written by the group Sidewalk Prophets and Corey picked it up before they were signed to a label. God directed him to choose the song for release even against the advice of his label management. “I had heard one of their original versions and did a Christian/Country version of it because that’s what I did as a soloist. We sent that out and it went number one overseas and in America,” Corey stated.

After his success with the song, his label suggested bringing in live instrumentation so the process began and then evolved into the Corey Brooks Band (CBB) in 2009. God had placed on Corey’s heart to keep a list of people who would be involved with his ministry and after meeting T. K. while on tour, and also being able to work with him during a jam session, he placed his name on that list. He just knew that someday they would work together.

Corey kept in contact with T. K. and had on occasion asked if he would be interested in joining the group. However, T. K. was attending Bryan College in Tennessee and was committed to his band Refuge 99.

Then in 2012, Corey placed a request on Facebook looking for a guitar player in the Princeton, WV, area. T. K. jokingly replied back asking if Athens, TN, was close to the area. Corey wrote back and told him that if he wanted the position, he could have it. Three days later, T. K. joined the band. It was his senior year in college but he felt that going to school Monday through Friday and then performing on the weekends would be workable. He would make the 5 1/2 hour drive one way to be a part of the Corey Brooks Band. T. K. remembered, “Almost every week or every other week of my senior year of college I drove to West Virginia on Friday and came back on Sunday night.”

The groups last Christian/Country album called Take Over The World was released in 2012 and CBB continued on until late 2013. During this time, they wanted to expand and move away from the country sound. To help the group make the change into a more contemporary sound, changing the name was an obvious choice. A name change would help to eliminate confusion and make changing genres an easier transition.

Picking a new name was a long progress for the group, but they finally settled on the name Spoken For. In doing so they wanted to back up their new name up with scripture and chose 1 John 2:1. “My little children, these things write I unto you, that ye sin not. And if any man sin, we have an advocate with the Father, Jesus Christ the righteous (KJV).”

The four member band saw some additional shifts to their lineup. Their piano player changed majors and was moving away and their drummer joined the Coast Guard. T. K. had mainly sang background vocals and played guitar, but with the transition, Corey and T. K. felt that they were not supposed to replace the exiting members. Once the other members stepped down, the group announced their new name and that T. K. was going to move into a duo position with Corey. The timing just worked out. “In the history of us being a band, we have never had to ask anyone to leave or step down,” Corey affirmed.

In December 2013, the name change was announced and the transition into a duo group was started. With the new venture, Corey and T. K. were not afraid to go head first into the contemporary Christian music scene by writing all the songs on their first album, Hope is Rising. The album was released in April 2014 and contains 15 tracks with two spoken word tracks.

Their title track “Hope is Rising,” with meaningful lyrics, relays a message of hope to those who are hurting and are in need. The original and contemporary upbeat songs, and spoken word tracks on the album, form a collection of work that speak about events in the Christian life and about fulfilling the Great Commission. Their mature lyrics reflect the evolution in their ministry and take on issues the younger generation deal with.

“The honesty in some of these songs is surprising, but the world needs to see this kind of transparency from Believers,” King revealed.

The group also released a single called “Freedom To Move” in October of 2014 that made the Billboard Christian Rock most added list in January 2015 and are looking forward to their upcoming summer touring.

As if being in leadership positions (Brooks is a youth leader and King is a worship leader), writing, recording, producing, and touring wasn’t enough, Corey and T. K. started the Merit Music Group (MMG), in October 2013. MMG is a multi-faceted music and entertainment company that includes Verb Records and Poor Mountain Records. They then added their own publishing company, Hollow Clay Music, in November of 2013. MMG also now has four music studios that offer many services from production and engineering to distribution and promotion for artists.

Corey explained, “We have been blessed to learn a lot about the business and technical side of the industry, and it is nice to be able to take that knowledge and help other people out. I have found that I don’t feel the need to be constantly on the road all the time now because I am still fulfilling that position of helping other artists go out and do that…it is a different type of serving. I really enjoy being on the other side of it.

“To have our moment of being on stage and do our stuff and play the songs God has given us is fun, but it is just as rewarding to go to a concert with one of our other artists and just help.”

Corey had a song out while he was still a solo artist called, “See You Here.” J. R. Pitsenbarger at that time was a DJ at the 92.9 radio station in Summersville, WV, and had played the song on air, however, Corey had never released it as a single. Corey had received a call from a close friend that told him about loosing his best friend in a car accident. After listening to the story, Corey was inspired to write the song and tell the story from the perspective of a best friend left behind. Someone in Buckhannon, WV, heard it playing on the radio. During that time, four teenage girls had been killed in a car crash in Upshur County. Corey was contacted by a local church and asked to perform the song at a memorial service for all the families and friends.

The outlook for the band and their projects over the next five years is breathtaking. Their label currently has six artists including themselves and they both have grand visions for where they will be. “I am getting married in May and I am taking a new position at New Heights Church in Huntington, WV, in August. We will continue to do Spoken For–probably a lot of local stuff, some touring during the summer, and some weekends,” T. K. told us. He also wants to focus on the label and see it take off by utilizing other producers, mixing and mastering engineers, and business personnel. Both he and his fiancé Charity will be moving from Tennessee to West Virginia to start a new adventure with New Heights Church and expand on the already blossoming music career either in front of the mic or in the background with the label.

Corey sees the label taking off and it allowing them to take more of a background role while still performing as Spoken For. He would like to be an associate pastor at a local church by the end of this year having just received his preaching license; and he will be getting his ordination this summer. He would like to then become a head pastor and continue pushing radio for the group. This would allow him to fulfill his call as a pastor and be able to perform in the group on the weekends.

Both Brooks and King attended Christian Colleges. Corey started attending Liberty University Online before graduating with his high school class. He graduated Liberty with a Bachelors in Psychology Christian Counseling and an Associates degree in Religion. T. K. graduated from Bryan College in Dayton, TN with a Bachelors in Contemporary Music with a minor in Film and Bible. He also studied at the prestigious Contemporary Music Center in Brentwood, TN.

You can find Hope is Rising, the debut album by Spoken For on iTunes, Google Play, Sound Cloud, and Spotify. Check out their website to find tour dates and more information at: http://www.spokenforband.com/.

SPOKEN FOR – HOPE IS RISING ACOUSTIC