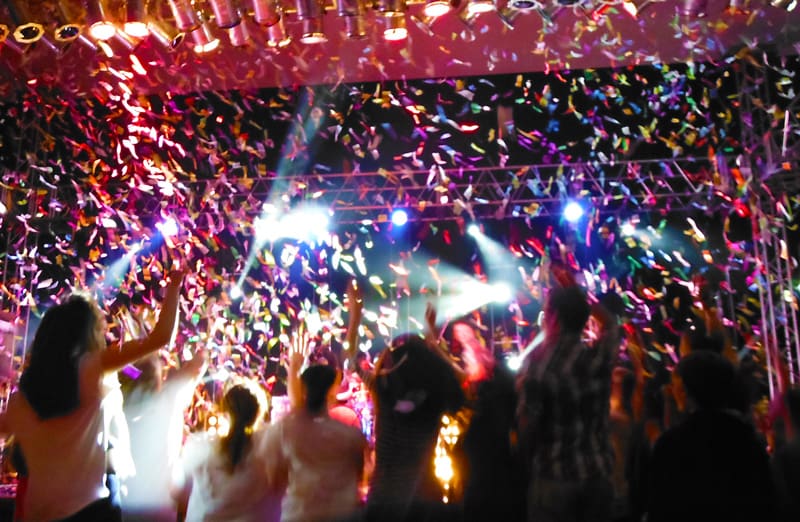 On Friday, May 1, the campus of Davis and Elkins College welcomed the Bright Side Tour featuring OBB, Jonathan Thulin, and Abandon. The event sponsored by Air1 radio station, the Davis Memorial Presbyterian Church, and the Campus Activities Board helped to start the Deja vu Festival weekend.

A “meet the artists tailgate party” was held in the McDonnell Center lobby where all the artists stopped by, mingled with fans, and took pictures before the show.

To start the show, Abandon belted out some of their original songs and invited the crowd to move toward the stage for some crowd participation. Their fast beats kept the crowd on their feet clapping and jumping as the music played on. In the middle of the set the group’s front man Justin Engler spoke about the “heart” of what Abandon was all about. The group takes time to speak at public high schools and visit local youth pastors to encourage kids that have come to Christ, letting them know that God has a plane and each person has a purpose.

They continued with their new single “Hope is Alive,” and finished their set with their popular hit “Feel It In Your Heart,” with the crowd holding up their hands in the shape of a heart.

Next up was the vocal stylings of Jonathan Thulin in an acoustic set that wowed the crowd. The room was filled with his commanding voice on his hit “Dead Come to Life,” and continued on with a little help from OBB guitarist Jacob and drummer Nick to perform his new single “Compass.”

Jonathan was very open about his journey of singing in his family’s gospel group, leaving it all and becoming an atheist, then coming full circle to knowing God fully and dedicating his life to Him. He began a journey with the Lord and found that the only way love can exist is through Him.

OBB took the stage performing “Heart Like That,” and “Up Close And Personal.” As the high-octane show continued, the crowd was dancing near the stage and were totally surprised by the release of confetti, as they rocked to the music and enjoyed the light show. Lead singer Zach later introduced a song so new it was only the second time they had performed it live called “Telescope.” The group worked with Jonathan Thulin on the song. He joined them on stage for the outstanding performance. In speaking with Zach after the show, he revealed plans to have the new song out sometime next year.

OBB ended the night with a rousing performance of their hit song “All Eyes On You,” and invited everyone to meet them in the lobby area to browse the merch tables, and pick up a pair of their new Bright Side Tour sunglasses that had arrived earlier in the day.

OBB has also been nominated to appear on millions of 7UP cans as part of the K-Love Fan Awards. Check out http://www.voteobb.com for more info and how to vote.

All in all the Bright Side Tour did not disappoint, and we are sure OBB, Jonathan Thulin, and Abandon have found many new fans in the West Virginia area.