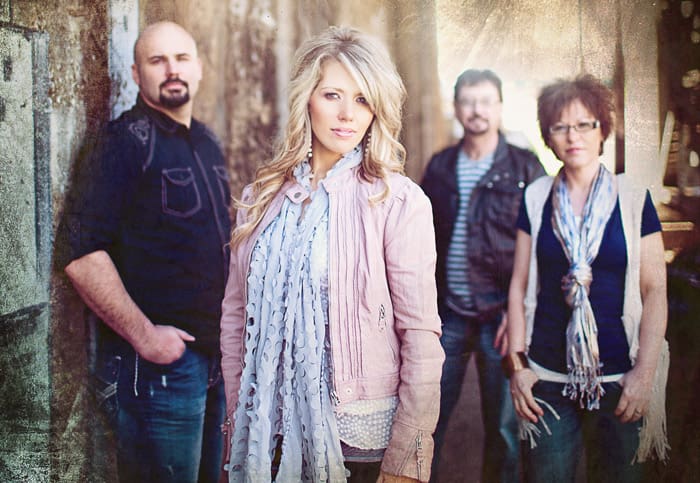 Performing comes naturally for this family group. In his younger days, Dave Shaffer, who plays piano, guitar, and does harmony vocals, played in a “rock and roll” band. He met Trish, who does harmony vocals, and the two would have Cassie, lead singer and bass player. Dave had not yet been on a path to God until Cassie was born. In order for him to see his daughter more often, he started attending the local church where she and her mother went. God moved in his life and his whole world changed.

“The Lord got a hold of my life and a few months later we got married. When Cassie was four we started singing. It was right around Christmas time. That was the first time we sang as a family,” Dave remembered. “We started singing at local churches and some revivals while still singing at our home church on the praise team.”

The Shaffer Band has played the 2014 National Quartet Convention in Pigeon Forge, TN, in fall of 2014 they performed on Trinity Broadcasting Network, were nominated in the first round of the Dove Awards with “He Ain’t The Leavin’ Kind,” which made it to #27 on the charts, and have opened for Grammy Award-winning and nominated artist Sugarland, the Crabb Family, and others.

Over the past few years, they have embarked on larger projects while moving into a more contemporary Christian, country-pop sound along the lines of Rascal Flatts. Their performances include original songs with a worship set and a few favorites, showing their diversity.

On the groups album Believe, released in 2009, Cassie co-wrote with Phil Cross five of the ten songs with “I Believe,” and “God Will Deliver Me,” gaining recognition on the Singing News Top 80 Chart. On their latest album, Grateful, on Willow Creek Records Nashville, Cassie co-wrote “You Are My God,” with Lee Black, and performs a heartfelt duet called “Love Can’t Walk Away,” with Adam Crabb. In 2013 they would also release a concept video for the song.

When looking for additional songs, they hold firm to finding songs with meaningful lyrics, songs with the right “feel,” and songs that provide hope and healing. Dave expressed how the song process works for him, “To me when a demo is written and it’s not clicking when we hear it, it’s not going to click.”

“I try to look beyond that and try to tune in to the words and go from there. I will say I’m kind of like dad, a song has to hit me with the music and the message at the same time,” Cassie added.

Airplay has been a challenge for the group. Not being full southern gospel and not as contemporary as others on the larger radio stations, it has been difficult to fit in to one particular genre of music. “We are kind of in-between which works great when we go into churches. They love what we do, but as far as getting airplay and promotion, it is really harder,” Cassie explained.

When performing, the band likes to start out with a cover tune or worship song to set the stage and then move on to some more original songs. Midway through the set, Cassie opens up about her testimony and the story behind their song “I Believe.” The set usually moves into a few more original songs and they always end with a worship session to bring it full circle.

THE STORY BEHIND “I BELIEVE”

In 2007 Cassie and Mike were expecting a baby. After some complications and seeing the doctor, her fear was realized when she was told she did have a miscarriage. Returning home, Cassie cried out to the Lord and felt anger but, she wanted His will in her life and gave all the fear, anger, and anxiety over to Him. Later that same evening they received another call from the doctor telling them since the miscarriage, her hormone levels should be dropping drastically and were not, indicating a molar pregnancy. Approximately 1 out of 1,000 pregnancies is a molar pregnancy, and in very rare cases it can turn into cancer. The doctor recommended a D & C immediately and to follow-up in a few months. At the follow-up visit, Cassie’s hormone levels were still too high and she got the devastating news that it was cancer.

The first rounds of chemo were not effective and Cassie would have to go on a more aggressive form. Her biggest fear of loosing her hair happened at that point. Broken, not feeling pretty, and in pain, she and Mike would continually read scriptures and rely on the promises of God. The events both tested the family’s faith and confirmed the faithfulness of God.

After 33 rounds of chemo, Cassie thanks God for healing her. She has been cancer free for over 6 years and they have a beautiful son named Jensen.

“There were a lot of days that all I wanted to do was cry, but I never stopped believing that God could see me through.” ~Cassie Shaffer-Hymes

The group is currently working on their seventh project, a full compilation CD. They were recently in the Tennessee studios where they finished writing 3 songs, started 2 others, and hope to have the final project completed later this year.

“I am really excited about this project. Some of the songs that have been coming in from our producer, Terry Thompson, I am like ‘Yes! I love these!’ ” Cassie exclaimed.

The new project has been a labor of love for the members and another test of their faith. After Cassie had her son Jensen in 2012, they returned to singing and she continued to build her voice back after the time off. In March of 2013 the group went to perform in Ohio, although Cassie wasn’t feeling well. God had always gotten her through in the past so she was not concerned. In the second song, she completely lost her voice to a whisper. They continued the set with a youth pastor leading worship songs. After returning home, she became sick and it led to a bad sinus infection.

Two weeks later, the group was scheduled to film the concept video for “Love Can’t Walk Away” with Adam Crabb. During filming Cassie would belt out the tune, which is at the top of her range, and ended up singing it about 15 times in a row. Not realizing her vocal chords were not completely healed from the sinus infection, the strain on her vocal chords became evident later in May.

Cassie went to two doctors in Nashville, TN, and all of her tests showed her vocal chords were completely healthy. With this good news, Cassie was still perplexed as to why she was unable to sing properly. She then saw a vocal coach at Vanderbilt Hospital in Nashville who had explained a phenomena that sometimes occurs when a vocalist looses their voice. It is caused by overcompensating due to the lack of volume they are able to achieve. The effort produces a total mental block and interferes with the normal function of the vocal chords.
Fear and anxiety gripped Cassie each time she would try to sing and her voice would freeze. She spiraled down mentally and felt out of control.

“It was terrible. Probably one of the hardest things I have ever faced including the cancer. Through the cancer I just had this peace that everything was going to be fine in God’s timing–and it was. But with this, I don’t know if it was more of a mental battle or spiritual battle. I was in a fog and out of control. It was a long, long battle. But I am coming out! Thank you Jesus!”

After working for months with a new vocal coach Cassie has been able to overcome the battle and has been improving her performances each week. She has also been sharing with audiences in hopes it will lift someone up that may have had a similar experience with fear and anxiety.

“I really believe that it was more of a spiritual attack, because the enemy knows who to go for. I do all the lead singing, so he was trying to shut our ministry down. In the same breath, I believe God allowed me to walk through that just for me to be able to relate to more people,” Cassie asserted. “Being able to return to those same churches has been a blessing. Hopefully it has been an encouragement to others who may struggle with fear and anxiety, and help them to see the turn around, and where God has brought me over the last year. They can know that hey, God brought her through. She didn’t give up on God. My desire is that people will be encouraged by it.”

Each member of Shaffer Band is involved in day to day life along with performing most weekends. They praise the Lord that all of their schedules have worked out over the years so they can continue to work and minister. Performing with family for over 15 years can be overwhelming, but with humor and humble hearts they have been able to overcome obstacles and grow closer to God, grow as a family, and expand their music ministry. They also make every effort to be at their home church on Wednesdays, even filling in for worship when necessary.

When asked what the group would like those attending one of their concerts to leave with, the answer was one of hope and of being uplifted. “I want everyone to be encouraged and to know that there is hope. Hope in Jesus,” Cassie offered up. Dave expressed that if they didn’t know Jesus before, that by the end of the show, he hoped they would.

Visit www.shafferband.com for updated tour dates or to inquire about booking information. You can also find them at www.facebook.com/shafferband or on Twitter @shafferband.