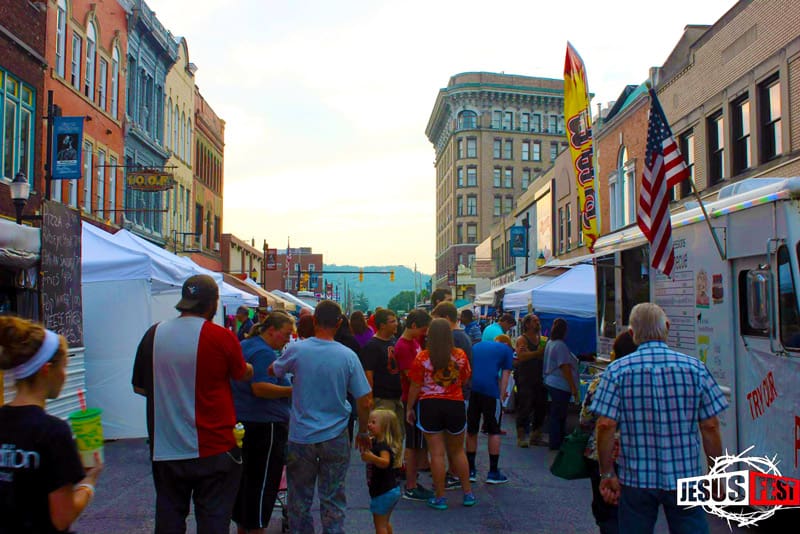 A National Day of Prayer event in 2005 was attended by two men, B.K. Vanhorn and Frank Jarman. Both were willing servants of God and did not believe in coincidence. B.K. was a God-fearing man serving on the Clarksburg City Council, and Frank was the director of the Clarksburg Mission.

At the event they sat beside each other and struck up a conversion which gave Frank the opportunity to speak about his vision. A vision to create a Christian event held in downtown Clarksburg, WV, that would celebrate Jesus.

Both men felt God had placed them in those positions, at that time, to help facilitate what would become known as Jesus Fest.  A non-denominational free festival to celebrate the Lord. The group started under the umbrella of the Greater Clarksburg Evangelical Association (GCEA), and eventually became its own organization.

Read Article with Schedule of Events

The festival is rooted in Christian beliefs and offers a setting for anyone to feel comfortable attending. The family-friendly atmosphere gives way for opportunity to fellowship with other believers, to unify in a common cause by working together, to praise and worship, and provide the unsaved a pleasant environment to hear the gospel message through music and the Word of the Lord.

Jesus Fest was first held in August of 2006. This year marks its 10 year anniversary and will be held August 7th – 9th on Main Street in Clarksburg, WV.

From their humble beginnings of a few hundred visitors, the festival has now grown to thousands of people attending. It has been held in downtown Clarksburg, except for the 2009 festival, when the venue was changed to the Veterans Memorial Park. Organizers soon found out logistically it was not able to fulfill the vision of the festival and brought it back to its original home on Main Street.

The Star Furniture Stage sits directly on the courthouse plaza and the Huffman Corporation Stage is just a block away near W. Main Street and S. 4th Street. Both stages are well equipped and the performing schedule is set to where only one band is playing at a time, giving attendees the chance to see all the performers and speakers, and allowing the festival to draw more named bands interested in Jesus Fest.

“We really believe that this is God ordained. That not just anywhere can you praise Jesus on the courthouse plaza,” stated festival secretary Moranda Clark.

“We have taken steps this year to make sure that the Huffman Corporation Stage is every bit as big production wise, and in quality,” added vice president Chris Richards.

Vendors, small businesses, and churches set-up and line the streets offering Christian merchandise, music, books, jewelry, and a variety of food for the three day event. Jackson Square is home to the children’s activity area on Saturday and Sunday. Kids are greeted with interactive games, a variety of inflatables to play in, children’s entertainment, and messages given especially for them.

Paul Boyles has worked with and volunteered with the festival, and over the last five years he has been coordinating the car, truck, and bike show. It is held on Saturday from 10:00 am to 3:00 pm, and is located at 5th and Main Street. Registration for the event ends at 2:00 pm, and there is a $10.00 donation, with the proceeds going to local food banks. Plaques will be awarded for coolest car, coolest bike, coolest truck, best presentation, kids choice, and most original.

This year the Uptown Events Center has joined with the festival to offer green rooms for the volunteers and for the visiting performers. Cool comfortable areas will be available just steps away from the main events.

Jesus Fest receives funding from both public and private sources helping to bring visitors to the area, and enhancing the image of Clarksburg.

Donations are welcome on their website and through their 100 Faithful Supporter campaign. A Faithful Supporter is someone who pledges $25 per month or $75 per quarter to help fund the event. The festival is managed by five board members: president, Mike Gallo; vice president, Chris Richards; secretary, Moranda Clark; treasurer, Ben Stottelmeyer; and director, Matthew Clark.  The event has been successful for the last nine years, because of dedicated volunteers, volunteers from the Clarksburg Mission, and board members that want to spread the gospel.

“Every year we pick out one organization to publicize throughout the week and this year it is Celebrate Recovery (Clarksburg). We will have some CR people here volunteering and to emcee,” Mike added.

This year’s line-up emphasizes the festival’s consistent record of bringing in top-notch speakers and talent with well know acts such as Abandon, Dan Bremnes, Manic Drive, Josh Wilson, Finding Favor, and Jonny Diaz. They also enjoy adding West Virginia performers like Scarlet Hill, Last Years Model, and the Clarksburg Chapter of the International House of Prayer praise and worship team. Speaking this year they have added the WVU Fellowship of Christian Athletes and Crusaders for Christ, a group of born again wrestlers that include: Dave Nelson, Tommy Rich, Jerry Garner, and Nikita Koloff.

When asked, What do you see as the future of Jesus Fest? President Gallo stated, “Each year, for the last several years, we have grown and grown. To get Jesus’ name on the streets of Clarksburg, you can’t go backwards. We have to go forward and we have to get more and more people to attend; there are more souls to be saved out there. We need more entertainers, world-wide speakers, more vendors, more sponsors, more money, more volunteers, and more denominations that love Jesus’ name. We have reached out to more denominations and they have had wonderful input. We don’t want the same, always bigger and bigger every year.”

Event organizers would love to see more denominations working together to promote the name of Jesus and not look at the differences but, look to the one similarity–Jesus. In the festival by-laws it states that one of their purposes is to unite the Body of Christ, to illuminate as a City on a Hill, to create unity by working together toward a common cause, and by uniting the church in praise and worship of our risen Savior Jesus Christ.

“The festival is an awesome conduit. I would think every church in Harrison County would want a booth lining Main Street,” stated director Matthew Clark.

“Jesus Fest is not about a concert, it is about being able to line the streets of downtown Clarksburg, WV, and proclaim the name of Jesus,” Moranda expanded.

In addition to the car show, quality entertainment, vendors, and children’s activities, there will be a prayer tent set up for anyone needing prayer or wanting information about how to come to salvation. A prayer team will be available throughout the weekend to minister to those in need around the event or who are wanting more information on the gospel of Jesus.

Matthew pointed out, “This is an opportunity for Jesus to be on center stage if you will, on the courthouse plaza, and us showing His love, sharing His word of love, and what we support.”

“We do it all for Jesus,” Mike concluded.