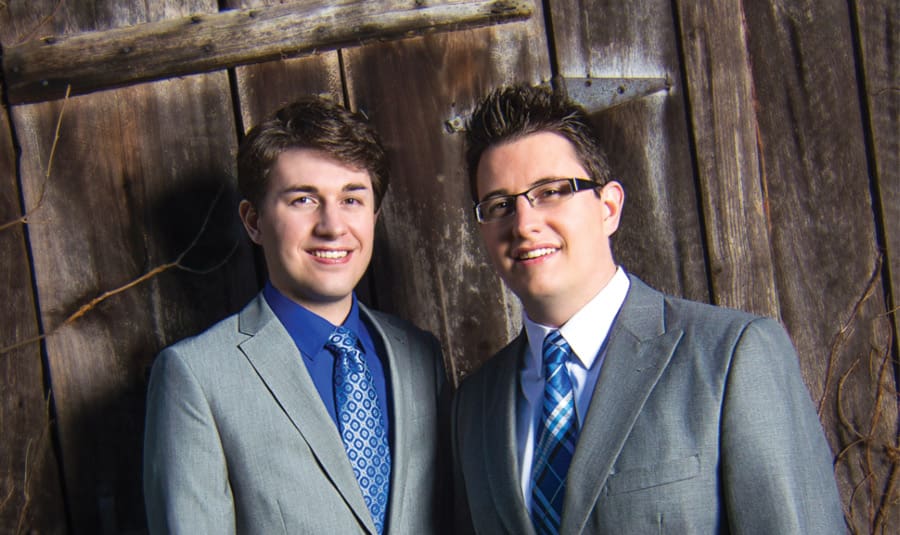 Lewis and Logan Taylor have been inseparable since their youth. At an early age, both felt a call to serve the Lord, and that desire has only grown over the years.

Growing up in Elkview, West Virginia, and attending Elk Valley Christian School, both enjoyed listening to Christian music, especially Southern Gospel. Their family attended church regularly, and they were brought up in the ways of the Lord. Music became a passion for the brothers.

“We’ve always been around Gospel music.” Lewis stated, “It has always been in our hearts since the time we were knee-high.”

Lewis and Logan both began singing while Logan took an interest in playing the piano. His mother enrolled him in lessons around the age of seven after a pastor had given Logan a small keyboard to play with.

“I took lessons for a year in first grade,” Logan explained. “The teacher expected me to play the sheet music, but I would start making up stuff that I heard in my head. I wanted to add things to it, and she would say, ‘No. That’s not how it’s played. You need to play it by the book.’ We would go back and forth over it, and she told my mom that it was probably best if I stopped and took off from playing the piano.”

“I took lessons for a year in first grade,” Logan explained. “The teacher expected me to play the sheet music, but I would start making up stuff that I heard in my head. I wanted to add things to it, and she would say, ‘No. That’s not how it’s played. You need to play it by the book.’ We would go back and forth over it, and she told my mom that it was probably best if I stopped and took off from playing the piano.”
Logan did stop and was only learning simple songs on his own, then he just began playing.

“The Lord has blessed him with a talent,” Lewis added. “That is Logan’s gift.”

In 2005 the brothers, ages 11 and 13, picked up a small sound system and started playing wherever they could, from little country churches and revivals to nursing homes.

“Our ministry has solely been grown out of the Lord’s help; by word of mouth. We have expanded over the years with the Lord’s help. It is nothing that we have done.” Lewis said.

In 2010 the Lord provided an opportunity for the brothers to record their first CD, only five years after beginning their music ministry. It was called Just the Beginning. It contained ten church standard hymns like “Amazing Grace” and was very well received. It went to radio and one of the local stations, The Wolf 96.1, played it often on the Sunday morning gospel show.

In 2012, Lewis was attending University of Charleston (UC), and Logan was at Elk Valley Christian School. While going to school, they were doing around eighty ministry appointments a year and their sophomore CD, Worth the Journey, gained traction, playing heavily in Mississippi and the southern states.

During that time Lewis graduated with degrees in public policy, political science, and history and Logan enrolled at UC. He later graduated with a degree in integrated marketing and design.

All through school they were traveling and ministering through song. After Lewis’ graduation, he felt a call to go to Bible College. Praying and asking for God’s guidance, he was led to attend World Evangelism Bible College & Seminary, a part of Jimmy Swaggart Ministries, in Baton Rouge, Louisiana.

While Lewis was in Louisiana, the brothers still booked a few ministry appointments where his father Todd filled in vocals with Logan. The ministry was imperative to them, and they wanted to maintain their connections while Lewis was away at the seminary.

After completing the fall and spring semesters, Lewis felt drawn to return to Elkview and continue with the music ministry. At the same time, their grandfather’s health was failing, and the brothers felt a call to be caregivers for him full-time. They wanted to keep him in the home he worked so hard for and give him a quality of life that would not be possible in a nursing home.

“He would go with us,” Logan fondly remembered. “We would pack up what we needed. We would get done singing, and I would give him his insulin shot.”

They maintained a steady schedule knowing that the music ministry was still a priority.

In November of 2014, Lewis was ordained as a minister and Logan as a Christian worker through Jimmy Swaggart Ministries.

Sadly, in 2015, the brother’s grandfather passed away. “He lived a long life,” said Lewis. “He was a good man; a Christian man. He was 87, rode motorcycles until the age of 85, and was an active supporter of our ministry.

“I preached my first funeral for my grandfather; I felt that he would want me to do that.”

The brothers continue to help their mother care for their grandmother since his passing.

In the spring of 2015, Lewis and Logan recorded their third CD called Nobody But Jesus at Daystar Productions, LLC in Knoxville, Tennessee.

Gospel singer and songwriter, Conrad Cook’s family, have become mentors to Lewis and Logan and his daughter and son-in-law even played on their latest CD.

“We had no clue at what we were doing,” Lewis said. “We learned a lot.

“We have been blessed to work with a lot of groups. The last time the Hoppers were in town we were asked to sing with them. That is meaningful to us. We have listened to them for years. And groups like the Freemans–we have been at gospel sings with them–and people like brother Squire Parsons, who wrote ‘Beulah Land.’  We really gain experience from being around them.”

The Taylor Brothers performing with The Hoppers

“You can see the progression from our first CD to this one,” Logan commented. “The first one was a simple piano with bass drum, and we progressed to the full bands with a lot more production.”

“The Lord has blessed Logan with an ear for music and production,” Lewis added, “and he has never had any formal training. He has played on all of our records, and he plays here at the church.

“We play music with a message to it–I think music can reach a soul just as much as a sermon can because it is a sermon in a song.”

Logan is working on a piano instrumentalist album, and they anticipate working on their fourth album in the coming year.

In August of 2015, Evangelist Donnie Swaggart, Jimmy Swaggart’s son, held meetings in Lewisburg and the brothers were asked to do the praise and worship service.

The Taylors choose songs they feel will glorify the Lord. They gravitate toward songs that uplift the name of Jesus and proclaim His death, burial, and resurrection. Their ministry tries to edify believers and give them hope in their walk with the Lord. They prefer to be behind the Cross and allow Jesus to be the focus.

“Music was meant–you can look in the Bible at the whole book of Psalms–to glorify the Lord.” Lewis continued, “Satan has used music to glorify ‘self’ and the world. The real intention of music is to glorify and worship God. That’s what we try to do.”

In April 2016, Lewis felt lead by the Lord to reopen the Parsons Chapel Community Church and start ministering on a more regular basis. It is a quaint little country church and holds church on Saturday night and Tuesday night leaving Sunday’s and the rest of the week open for ministering appointments. They have been welcomed by the community and are continuing to grow the congregation.

“Our ministry has a focus on the cross of Christ–Jesus Christ and His shed blood,” Lewis explained. “ Jesus saves through His blood. Jesus will sanctify and give you the faith and righteousness you need to live every day.”

While attending seminary and serving as a greeter at the Family Worship Center in Baton Rouge, Lewis met Pastor Scott Corbin who recognized him from his appearance in the school’s promotional videos. From that divine meeting, he was blessed to start an hour-long radio program airing on 92.1 FM WXPS [Listen Here] out of Spartanburg, South Carolina. It is a part of Truth Chapel World Evangelism Church, pastored by Corbin. They are an affiliate of Jimmy Swaggart Ministries and have made Lewis an associate minister. The program now airs three times a day on Thursdays. The program includes some of the Taylor Brother’s songs, along with the ministered word. Logan uses his expertise and does the mixing a producing.

“Our ministry is all about uplifting Jesus,” Lewis said. “Sometimes it is easy to get our eyes off God and onto ‘self,’ so our goal is to always point people to Jesus. Jesus still saves, and Jesus can turn your life around. Every good thing that we receive from God, including our salvation, is through Jesus Christ.

“The apostle Paul wrote in I Corinthians 2:2, ‘For I determine not to know anything among you saved Jesus Christ, and Him crucified.’ And in I Corinthians 1, ‘For the preaching of the cross is to them that perish foolishness; but unto us which are saved it is the power of God.’ So the cross is the answer. That is what our message is.”

“First and foremost,” Logan stated, “I hope people see Jesus Christ through us. I hope that people don’t see and hear us but, they listen to a message that will speak to them and have an impact on them; that they won’t leave the service the way they came in–they’ll be changed.”

The duo sees themselves continuing their music ministry while pastoring the church and letting the Lord work His perfect will through them.

None of us know what tomorrow holds, but Lewis and Logan both believe the Lord is coming soon. They are striving to reach more people with their message of hope through the church, their ministry appointments, and through radio and social media.

The Taylor Brothers embody a hope and faith only found through a personal relationship with Jesus. Their family harmony and ability to see opportunities to love others on a constant basis adds to their incredible talents and their all around godly nature. The two are always together. The Lord gave the brothers skills that complement each other; Lewis is the talker and Logan is the quiet one working in the background. At only 25 and 22, we look forward to what the Lord will have them do next.

“We live in a time when people think there are many paths,” Lewis proclaimed,  “but Jesus is the door. He is the only way.” 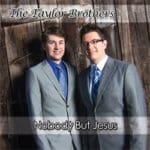