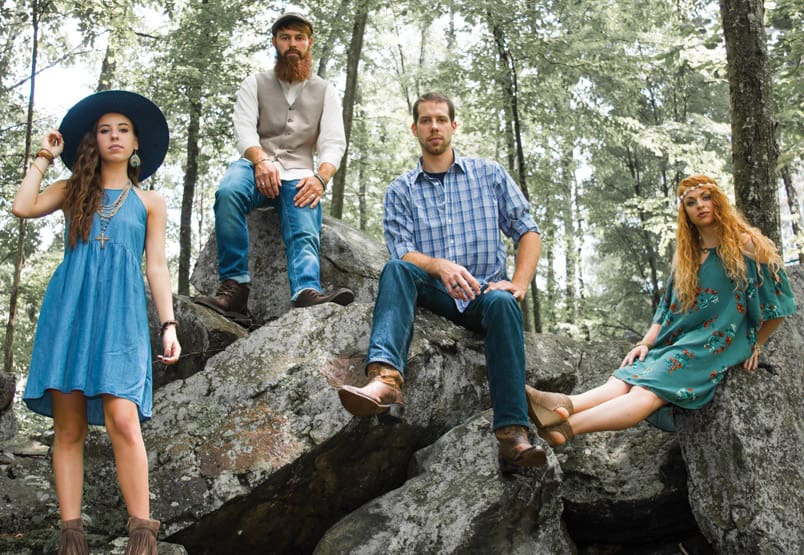 From the first note on the debut album from Heartstrings Gospel Band, “It’s About Christ,” you are engaged in a wonderful journey of discovering the group’s love for Christ.

Founding member Janessa Wilson, who plays guitar, fiddle, and does lead vocals, can’t remember a time when she wasn’t into music. She started talking and shortly afterwards began singing along to the songs her mother sang to her as a child.

Janessa started playing music in her early teenage years where she discovered she not only had a passion for playing but to write. The connection between her love of poetry and draw towards music made perfect sense as she began to hone her talent for songwriting. Janessa realized that was her heart’s passion and began to pursue it, even changing her major at college three times to align herself with her dreams. Ten songs on the album are written by the songstress where she showcases her vocals as well as musical gifts on the fiddle.

I will praise the name of God with a song, and will magnify him with thanksgiving. Psalm 69:30

“I have always been music first,” Janessa stated. “I’ve tried three majors in college, and nothing else will do. For me, music has always been what I wanted for a career.”

The other founding member is Patrick Wilson, Janessa’s brother. He plays keys, does background vocals, and is the all-around sound and media guy for the group. Patrick also started in music early, taking piano lesson when he was around 5 years old. He admitted that he hated it until around the age of 12 when he discovered he could do more than just strictly adhere to the lesson plans. Patrick found his own style and hasn’t looked back. He began to enjoy playing and the freedom he had to add to a particular song. The lessons were only guidelines from where his creativity had its foundation.

The two first performed in their father Pastor Terry Wilson’s church. It was not very good, both agreed, but the stage was set, and they knew if they worked hard, they could follow their dreams of glorifying Christ and playing music.
“I think singers are called,” Patrick said.

“I believe that it is like a lot of other talents,” Jenessa added. “God gives you the ability, and maybe not every single word is going to inspire you like a preacher does, but there is definitely inspiration behind it.”

“Ministry has been a foundation of what we do,” Patrick continued, “it formulated where we started. I think as a person in ministry you constantly have to ask, where are you ministering the best or what does ministry actually mean?

“To the Fundamental Church, ministry is getting up and singing purely gospel music. I believe one should do that. And it’s always speaking the right things–you have got to say it just right, and say certain things that get the church going. Janessa and I have recently been asking is that really ministry? Is it really ministry if we are only reaching the Christian Church? Yes, God calls those to feed His sheep and to grow the body of Christ, but we have to realize there is a lot more ministry opportunities than that.

“If people follow us and listen to how our music has progressed, they will hear songs that could be used in church, or in a fairs and festivals setting. It still speaks an essential message that is pure gospel.”

“For any artist who wants to grow and not stay where they are,” Janessa stated, “they must reevaluate their target audience and see if it is possible to reach an audience that may not be Christian. That is something we have been drawn to do.”

The group is sensitive to the protocol of each church and venue, and adjust accordingly to the crowd and individual settings. At fairs and festivals, they put on a show and have fun with the audience changing their sets to accommodate a more current lineup. The majority of their songs are written by Janessa, and they add in classics or more contemporary music as needed.

Janessa’s songs are inspired by her own life and are written from a Christian worldview. She likes to think outside-the-box and strives to help interpret the needs of her generation while remaining faithful to the truth of the Bible.

The group is currently going through a transition with their sound and taking it in a new direction. Past members Brandon Howdershelt, drums, and Kaleb McNemer, upright bass, have both moved on to other projects; however, both played an integral part in developing the sound on the album.

“Brandon is a phenomenal drummer that can play any size venue with ease,” Patrick complimented. “And Kaleb left to go play full-time with Larry Efaw and the Bluegrass Mountaineers. His heart was always for bluegrass and man is he talented.”

After searching for new members, Janessa and Patrick were pleased to add Mercy Henry on keys and vocals, and Jared Henry on bass and lead and acoustic guitar, and are in the process of looking for a new drummer. The Henry’s have brought their own musical styles to Janessa’s lyrics, and they are all excited to perform with the new members. The new sound is a big transition from the country/bluegrass flavor achieved on “It’s About Christ,” and moves to a softer and more contemporary arrangement with stirring harmonies. It’s a new, fresh sound that they call Indie Folk or Folk Pop where the lyrics tell a story and takes the listener on a journey. They hope their current audience will enjoy the updated music while being able to connect better with the younger generations who are looking for the truth.

Patrick mentioned that over the last 10 years or so people have used the ‘Christian jargon’ to put out a message that is just not resonating with the youth and the band does not want to fall into that trap.

“The younger generations are going to connect with your message if you are true,” Janessa said. “If you are not going to be true, they won’t connect.”

The band can see a shift in the culture and are actively looking to find the most effective way to communicate through their music ministry to the needs of their generation. Their heart is to convey their message in a more valuable way without the fear of straying from Biblical standards just because it is different. Patrick and Janessa both believe that walking out a Christian life is not something that is fragile or will wash off in a less than perfect environment or in a different musical style because those who believe, know that God is with them. Following guidelines and keeping true to the Word is what matters, not so much the delivery method.

For Heartstrings Gospel Band there is no one recipe that they follow. They could go down the cookie-cutter route of gospel bands but would lose their uniqueness on that road. They would rather stay tried and true and achieve their ministry and professional goals by being original.

Visit the band online at: heartstringsgospelband.com for music and event dates.