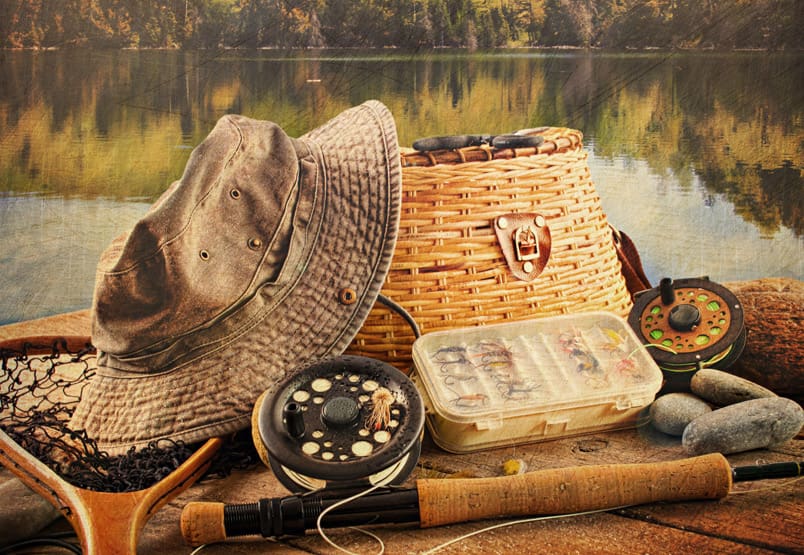 Being one of six siblings–four boys and 2 girls–and the youngest son, Clifford could just tell he was his mother’s favorite. Though his mother loved them all, she seemed to dote on him a little more. She was always holding his hand when they walked, and on Sunday’s he would lay in the pew beside her with his head on her lap during services at First Baptist Church in Buckhannon, West Virginia, while the rest of the family sat down the row. Clifford loved the time he spent with his mother, especially at church.

“That is where I came to know my Jesus,” Clifford beamed.

On occasion, he would get up in the middle of the night to go to the bathroom downstairs and would find his mother doing laundry in a washtub or ironing into the wee hours of the morning. She was always singing and praying to the Lord and asking Him to take care of her children. Even as a small child, Clifford realized he was blessed.

Clifford loved to fish. He had heard the stories of Jesus and how He went to gather the fishermen when He started on His journey and it touched a place in his tiny young heart.

Growing up near the Buckhannon River, at 9 years old, the temptation to skip school and go fishing became too much to resist one beautiful spring morning.

That morning everyone had gotten up and eaten breakfast and were preparing to walk to school, but not Clifford. He had other plans. The crisp blue sky with the smell of buds just waiting for the sun’s rays to warm them open drew him to concoct a plan that would be foolproof. As the children walked to school, they got about two blocks away from home before his flimflam was revealed. He told them he had left his books at home and had to go back and get them.

Clifford ran back home but snuck around behind the house, hid under the porch, and waited for his parents to leave. He changed into some old pants and a flannel shirt and went to the backyard to dig up a few fishing worms, put them in a can, and took off for the river.

Over the winter there was a flood that had undermined the soft dirt of the riverbank, and a large Sycamore tree had fallen across the river.

Clifford remembered, “I thought, ‘Well if I can walk out on the trunk of the tree I can get to the middle of the river, sit down, and get some good fishing in!’”

With that, he began down the tree trunk slowly with his can of worms and found a spot to sit down. He baited his line and threw it in. Then he leaned back to relax on a limb that was sticking out and was enjoying the beautiful day thinking what a wonderful thing God had done!

About ten minutes later it happened. The tree lurched sideways, rolling over in the water, and Clifford was thrown into the river.

“I came up kicking and splashing and screaming,” Clifford recalled. “I began to yell for my mommy and daddy. Well, they were both at work.

“I went down again and came up spitting water and yelled this time for my brothers and sisters, but they were all at school.

“The third time I went down and came back up my lungs had already filled with water, and I could not do anything but gargle. That’s when I yelled, but this time in my mind, ‘Jesus, please save me!’”

By the third time, Clifford was so worn out that his body was unable to struggle any longer and he began to sink. The coldness of the water filling his lungs and pressing against his body drew him further down. He felt no pain, but as he glanced up as if it was in slow motion, the light began to fade slowly into total darkness.

The only thoughts that came to his mind were of his mother. He felt so sorry for disappointing her in this way and memories of all the good things he and his mother had done flashed before his eyes.

Finally, his feet sank softly into the muddy river bottom up to his ankles, and he felt his body starting to bend over. He could see nothing but black darkness. As he was about halfway over, a deep, authoritative voice blazed through his mind, “Clifford, it is not your time.”

In his last moments of awareness, he felt fingers pressing between each of his ribs and his body floating upward. That is the last thing he remembers.

When he woke, he was safely on the riverbank and not a soul in sight.

That day, at only 9 years old, Clifford no longer had faith in Jesus, he had full knowledge through experiencing God first hand that He was real and He was with him! He knew without a doubt, God was real.

“I am 76 years old now,” Clifford explained, “And have been fishing all my life. But, the best fishing trip I have ever been on is the one God prepared for me. I can honestly say I have been baptized by the Father, the Son, and the Holy Ghost.”

Clifford never told anyone about what happened, not even his mother, until 30 years later when he gave his testimony at church one day. When he did, he was deeply troubled by the reaction. People came up to him and told him, you were so lucky, and even said it was a story for the TV show The Twilight Zone. No one was compelled to praise God for what He had done and just brushed it off as luck. After their response, he vowed to not tell his testimony again.

A couple of months ago, he was moved by the Holy Spirit to tell it again. This time, the reaction was entirely different. Those listening were brought to tears, and once he was done, everyone clapped and gave praise to God for His goodness. And now, he is sharing it with you.

In a unique way only possible through the Holy Spirit and divine opportunities, Clifford has not only been an avid angler all of his life but a fisher of men himself. Whether it has been declaring the goodness of God with others while Steelhead fishing on Lake Erie, taking time to speak to a distraught Veteran sniper along a secluded river in New York with no one else around for miles; or bringing together people from different states for impromptu services at Dolly Sods because of the graphics on his truck, he remains steadfast in his knowledge that God is real and He is with us always.