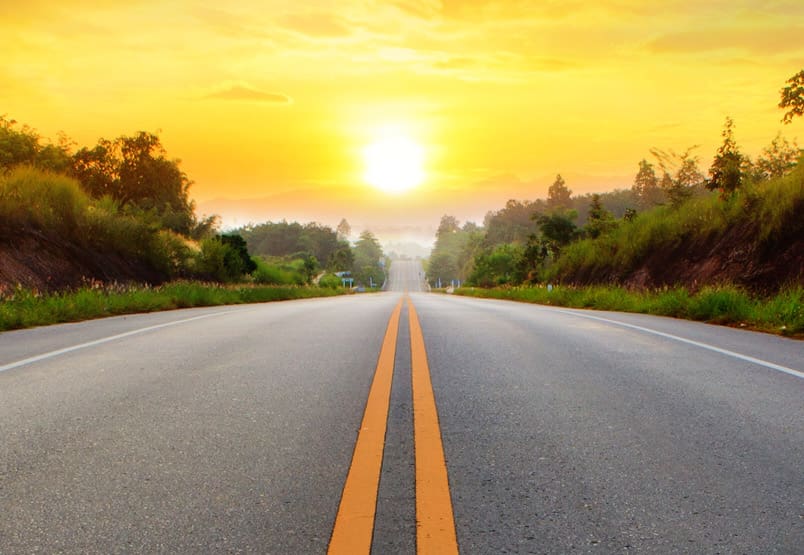 Rolling down an unmarked road in North Carolina, it occurred to me that even though there was no yellow center line, people still knew where the boundary was and what they should be doing as they operated their vehicles. Hum… and THAT got me thinking.

Boundaries
When God created the Heavens and the Earth, He established limits. The water could only go so far, and the fish could just remain in the sea, while the fowl remained on the Earth. God formed the species of Man and placed him in the boundary of a body in the Garden of Eden–a physical barrier for the physical man.
Our world was turned upside-down after Adam chose to go against the boundary that God established for him. You see, God commanded Adam to not eat of the tree of the knowledge of good and evil. He was an ambassador of his real home–Heaven–but he didn’t heed God’s words. When he ate from the tree and stepped outside the will of God for his life, God had to place him and the woman outside the protective border because a judgment was the consequence of his disobedience

Before The Written Law
Since Adam, the boundary was breached, and the minds of men were separated from the true knowledge of who they were–children of God. They were deceived by Satan because he was given power over the world, or the governing system when the sin nature process began. Adam had planted a seed of disobedience, and the consequence of that action was Satan’s rule–the judgment was already built into the choice. Enoch, the seventh generation from Adam, and the father of Noah walked with God and was taken into Heaven never dying on Earth, and Noah brought the whole of mankind through one of the most significant events spoken of across the globe–the flood. Abraham believed in the invisible God who spoke to him and stood in righteousness because he was able to look beyond what the world was saying and listen to Truth. God chose Abraham and his descendants to begin the process of relearning how Heaven worked. God established a covenant with Abraham who was the patriarch of the Hebrews and the Jewish people. It’s interesting to note that the word Hebrew also means: one from beyond.

My people are destroyed for lack of knowledge: because thou hast rejected knowledge, I will also reject thee, that thou shalt be no priest to me: seeing thou hast forgotten the law of thy God, I will also forget thy children.
Hosea 4:6

The Law God Gave to Moses
With the Law comes a curse because no man can be justified by it–it is impossible to keep because it is perfect. The law was the schoolmaster put down in writing by Moses, but when Christ came to Earth, He was the Law made flesh and walked among us. In essence, Adam drove the car off the road God made. Enoch established the plans for the second road. Noah rebuilt the way, Abraham started again then Moses got the road rules in written form.

The Consequence is Built in
Scripture reveals many conversations about action and reaction–if this, then that. A choice made will either end in a positive or negative result. To explain how things in the natural work, Sir Isaac Newton put it this way, “For every action, there is an equal and opposite reaction.” Newton found that forces always come in pairs, but it is also true for the unseen spiritual world.

I have set before you life and death, blessing and cursing: therefore choose life
Deuteronomy 30:19

Once the process is started, it will finish according to the choice made. So how does this pertain to the nonexistent center line of a road? Glad you asked.
So, if you or I go driving down a very wide unmarked road, we know that we should stay on the right side to drive (and our friend’s on the other side of the world would stay left), but who says so? The law does.

The country you live in has laws in place to keep order and also has laws that require you to drive on the appropriate side of the road to avoid penalties. The cops could give you a ticket or for example, if you drive on the wrong side of the road, you could die in a car wreck, be injured, injure another, or escape with no issues. Simply put, there is a built-in reaction that is going to occur and is determined by the choices you make.

All too often we blame a defeated devil for the problems we created because we choose not to find out what God wants us to do either by asking the Holy Spirit or by referring to scripture. It’s the easy way out of taking responsibility for our own choices. By fellowshipping with the Lord regularly, renewing our minds with the written Word, and by gaining self-discipline over our own lives, we can lessen the occurrence of adverse outcomes and take power away from the devil we don’t know while removing the one that we do.