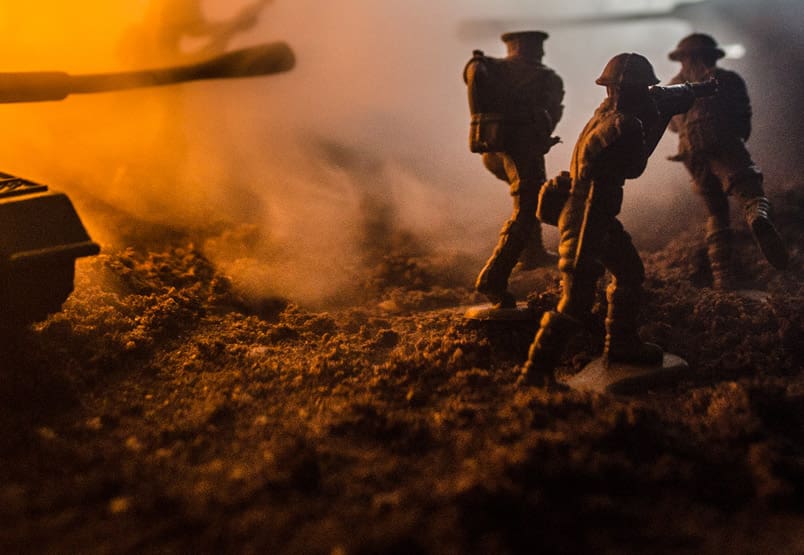 From the very first scene in the movie Dunkirk, you know you are watching a war movie. The intense music that drones along from moment to moment leaves no doubt of the atmosphere the movie makers want you to experience. The lead character Tommy is continuously moving forward but at every turn, another wall…another event he had no control over. However, there is one thing he did know; he was at war.

In warfare, the enemy is always coming at you. Sometimes you can see an enemy coming from a long way off as the planes inch closer to your location. Sometimes you can only hear the sound of the approach. Sometimes it is a ship inching its way across the water toward you, or it could be the dreaded sound of a torpedo shot in your direction. Alternatively, maybe the attack comes by land–thousands of soldiers in an army bent on taking you out. Imagine the scene in The Hobbit: The Battle of Five Armies. An enemy battalion marching at you willing to do anything to take you out. No other thought enters the Orc’s minds other than to do the will of the evil Sauron.

I doubt anyone reading this wants to be at war let alone in one, but we are in that exact season. Also, this may seem strange to you, but it gives me great hope. We are called to rejoice in our sufferings, and during wartime, there is suffering, but there will be a time of peace. However, peacetime is not just yet. Jesus said, “Think not that I am come to send peace on earth: I came not to send peace, but a sword.”

Who now rejoice in my sufferings for you, and fill up that which is behind of the afflictions of Christ in my flesh for his body’s sake, which is the church: Colossians 1:24

Look at what has happened during wars throughout history. After a war is fought, and the battle is over, there is usually a season of peace that follows. How ironic is that? To get to a place of peace, you must fight the battle and win. Some wars will go on and on because one side does not accept defeat, or maybe one side doesn’t know the victory is already theirs. Eventually, there will be a winner–either good or bad.

Two people who undoubtedly followed the Lord were Caleb and Joshua. (Numbers 32:12) They represented two of the twelve tribes of Israel and were allowed to enter the Promised Land. Saved and delivered out of Egypt, only two tribal leaders were permitted by God to enter Canaan. The other ten tribes under Moses saw how God operated daily, so what did they miss? Why were some not allowed to enter the Kingdom set aside for all the Jewish people? They were offering up sacrifices, saying their prayers, following the Law, and were able to see the miracles of God first hand. However, God only spoke of Caleb and Joshua as doing His will ‘wholly,’ not the others. If God’s will is ‘wholly’ contained within these two men, we should know about them and what they did so that we may gain insight on how to not only be saved and delivered but also how to enter the Kingdom.

NOT PHYSICAL BUT SPIRITUAL WAR

Joshua, who is a descendant of Jacob, is mentioned first in Exodus 17:9. He was the son of Nun, which means fish or prosperity, of the tribe of Ephraim, which means double fruit. Joshua’s name means Jehovah is salvation or Jehovah-saved. He was the leader closest to Moses–his protégé–whom he called out to fight, or consume, the enemy Amalek, which means dweller in a valley. Amalek was the grandson of Esau, Jacob’s older brother. Jacob tricked their father Isaac into giving him the blessing over Esau.

The Amalekites, sworn enemies of Jacob and his descendants because of Jacob’s actions, were the first to go after the Jewish people with a surprise attack after they were saved and delivered from Egypt. Joshua, at the request of Moses, chose his men and went to battle as Moses stood on the hilltop with the rod of God with Aaron and Hur. As long as his hand was up Israel prevailed but as soon as it went down, Amalek prevailed. As Moses grew weary, Aaron and Hur placed a stone for him to sit on as they steadied his hands until the sun went down and Joshua overthrew Amalek and his people.

Moses was commanded by God to write down this event in a book to memorialize it and “put it in the ears of Joshua.” God declared He would utterly erase the remembrance of Amalek from under Heaven and He would have war with Amalek from generation to generation.

Joshua was a leader, a warrior, and is considered a type of Christ. Divinely, Moses changed Joshua’s name before they went to search the land of Canaan from Hoshea, which means deliverer and salvation, to Jehoshua, which means Jehovah is salvation. (Numbers 13-16) Hoshea translated into Greek from Aramaic is Yeshu’a, the name of Jesus. Joshua manifested the present help and salvation of God, walking out the call on his life as a Spirit-filled deliverer.

We first see Caleb (Numbers 13:6) as the chosen leader to represent the tribe of Judah among the other tribes searching out Canaan. We know he was from the tribe of Judah, which means praise, and the son of Jephunneh, which means he will be prepared. Caleb is also a descendant of Kenaz, which means hunter. When I research the meanings of names, it is always interesting to see the message behind them. For Caleb it would go something like this: his praise prepared him for hunting!

Now, when the men returned from spying out Canaan, they reported a land genuinely flowing with milk and honey with much fruit. However, their enemies including the Amalekites, whom Joshua had already defeated once with the help of the Lord, were large and strong with walled cities. (Numbers 13:29) Then Caleb–praise–was the first to speak up and stilled the voices of the people.

“Let us go up at once and possess it; for we are well able to overcome it!” he said.

Praise precedes the battle just as it did in Exodus, where Moses had raised his hands in praise to God as Joshua led the fight against the enemy. However, there was another component, Moses changed his name to Jehoshua because the one achieving the victory was the Lord. So, there you have Caleb who was prepared to praise God and go into battle while the warrior and deliverer Joshua led the way. The third and most crucial element in this story was the Spirit of the Lord making a way to victory. Caleb and Joshua both listened to the voice of God–the Holy Spirit–believed, and obeyed.

And if one prevail against him, two shall withstand him; and a threefold cord is not quickly broken. Ecclesiastes 4:12

The others were still fearful and said, “We are not able…” which to the Lord’s ears was an evil report. Why? Could it be the story of Jehoshua overcoming Amelek was lost on them, and they didn’t believe it or didn’t try to understand it or was it a spirit of fear that was not of God speaking? They murmured all night long and then wanted to go back to Egypt.

Joshua and Caleb rent their clothes and spoke again to the congregation telling them the land they spied out was good and “if the Lord delight in us, then He will bring us into this land.” However, they warned not to rebel against Him or fear those living there.

Only rebel not ye against the Lord, neither fear ye the people of the land; for they are bread for us: their defense is departed from them, and the Lord is with us: fear them not. Numbers 14:9

What did the congregation do? They rebelled. They didn’t choose to listen to the words Joshua and Caleb spoke which were from the Spirit of God. They wanted to stone them. They wanted to go back where it was comfortable, familiar, back to Egypt, and not wage war against their enemies. They feared the occupants of the land more than they wanted what God had promised them.

Is the church body listening to the Spirit? Is the body seeing the increase in attacks upon it? Is it looking to those called to the prophetic gifts? Is it willing to get out of the valley and move out of a position of defense against the attacks happening right now and move into an offensive position to take ground for the Kingdom?

Caleb and Joshua said that the enemies were ‘bread’ for us. Now, what is a verse of scripture that mentions bread and is recited regularly in churches around the world? That would be the Lord’s Prayer. (Matthew 6:9-13)

Did you know the Greek root word of bread is airo and it can mean to take away from another what is his or what is committed to him, to take by force. We are not called to fear, we are called to consume our enemies–daily!

So what about those who were not able to enter? The Bible tells us why in Numbers chapter 14, verse 22:

“Because all those men which have seen my glory, and my miracles, which I did in Egypt and in the wilderness, and have tempted me now these ten times, and have not hearkened to my voice. Watching and performing is not the same as being filled with the Holy Ghost and following His voice.”

The Church, the Body of Christ, is like Tommy. With the scene established, the princes of this world are rising against the truth of the Word. We see surprise attacks around every corner, and many are feeling the weight of some significant event that is pending. I feel in my Spirit that like me, daily they’re holding on by their fingertips, finding it hard to breathe, and wondering, what have I done? Why are all of these events coming at me? I don’t know how much longer I can hold on!

God placed it in me to tell those reading this to understand that He is your salvation. He is the Winner of this battle, and that those who endure will be redeemed! He has given each of us the power within us to call upon His name through the Holy Spirit. That is the same Spirit that Caleb and Joshua had that equipped them to see that the Lord had already won the battle! Put away the murmuring about the events taking place and fellowship with the Holy Spirit so you will know Him when He speaks. Take on a spirit of victory in the Lord as another surprise attack comes. Know that when you praise God in the midst of the attack, you confuse the enemy, and he must flee! Know that we must participate in this battle from a position of offense and take ground. Envision battalions of angels surrounding you and your loved ones protecting you from the army of Sheol. The fight indeed is a spiritual one, and by using your imagination in a way that reflects the promises of God and speaking the Sword of the Word aloud, you put yourself in a position of protection by an all-powerful God! He will give you peace even in the middle of an attack when your eyes are on Him. Declare His promises daily and consume your enemies! When praise joins with salvation and the Holy Spirit no weapon can defeat it! The battle is won, and peace will prevail. 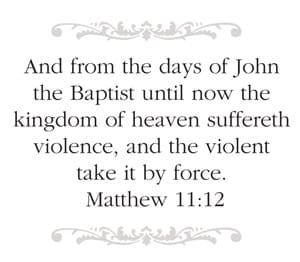