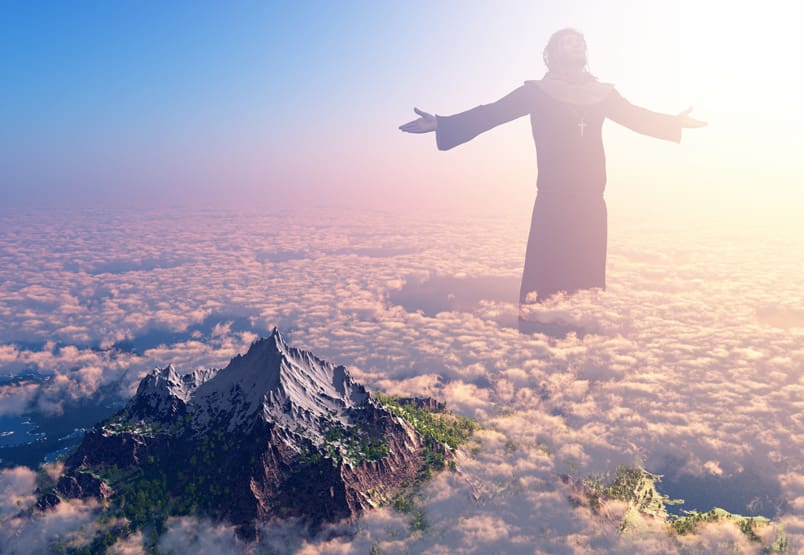 Worldviews are fascinating. Everyone has a worldview, whether they know it or not. One’s prime worldview is a collection of subordinate worldviews about specific issues, beliefs, and values. An individual can have conflicting sub-views in their personal set, and what one would call a general Christian worldview may not be wholly Christian at all. Identifying and defining one’s own personal worldview and recognizing another person’s worldview position are practices that can provide wisdom, direction, and peace. What better time in the year, than now, to reflect on an Easter Worldview?

James W. Sire authored a book called The Universe Next Door, which is a basic worldview catalog. He identified seven basic areas of belief that form a worldview. The following list was developed from Sire’s basic questions found in the first 4 editions of his book.

1. What is one’s underlying belief of reality? Is God real? The sun, earth, and stars real? All the above real?

2. Is the world created, or did it come into being on its own? Is it orderly or chaotic? Is it an exclusive organic matter, or is it spirit? Both?

3. Are humans just creatures or more than dust?

5. What is knowledge, and how do people know it?

7. Does human history have value?

One’s beliefs about these 7 areas form a general worldview. Worldviews are layered, or in other words, questions needing answers that emerge from the basic assumptions. The thing is… a person’s worldview can be as individual and unique as the person.

A case study on conflicting worldviews on one person’s schema. An example comes from research conducted for a graduate degree from West Virginia University (Defining Environmental Theology, Content Analysis of Associated Literature). One prominent Presbyterian Theologian basically stated that the world, or the material universe, in its entirety was God and claimed that this was a new Christian worldview. The Bible says that the material universe is created. The Son of God is identified as the creator. Look here, we have questions emerging from an answer. What is your Trinity worldview? What is the Christian Trinity worldview?

Another very interesting practice was identified in the environmental theology project. Christian Theology states that man pierced God with spikes as part of the salvation process. Environmentalists, who see nature as their god, have spiked trees in order to save nature. God only shakes his head at this irony.

When a person knows what he or she believes, decisions are easier to make, and outcomes that follow can be understood. Anyone who behaves contrary to the worldview they know to be true fully understands the penalty as it is being paid. Likewise, one who follows the direction a good worldview prescribes is entirely grateful for the good result. Look around; it is not hard to find people who have bad things happen to them because of their behavior and cannot understand why it happened to them at all. They have no identified worldviews and a small list of deviate values. People are not made to live in an intellectual vacuum. A sociopath probably has a limited set or no working set of worldviews.

There are several different Worldviews of Easter. An essay, probably a book, could be written about each of Sire’s seven questions. A Christian worldview response, supported by the Holy Bible, would be articulated in this manner.

1. What is one’s underlying belief of reality? God is real, and the material universe is also real. For an Easter Worldview, God needs to be identified; in the Judeo-Christian Worldview, the God of the Bible is prime reality. In this view, God is the creator and benevolent to creation. He entered into the material world in bodily form, a real physical body. Specifically, for Easter, the divinity of Jesus is accepted, and His death, burial, and resurrection celebrated. Two other questions must be answered here. Is the Holy Bible real? Is it inerrant? That is, it never tells us what is not so.

3. Are humans just creatures or more than dust?   Members of the human race all have a body, a soul, and a spirit. People were created in the image of God for many reasons. God wanted a family, not simply a created family, but one that shared in His life. The Christian events at Easter provide the portal in which all people have an opportunity to transcend into God’s family. Also, humans are created in God’s image so that God would have a physical body in which to behave like God.

4. Death and dying? At death, humans are separated from this world; they don’t just cease to exist. The Christian worldview is futuristic concerning death. Corporeal death is real; the body eventually returns to dust. The soul sleeps (mostly becomes inactive), and the unified soul/spirit of the born-again believer goes to be with God. Resurrection is a key element in the Christian worldview; the body is raised from the dust and reunited with soul and spirit. This is true for both those who accept the work of Christ and those who don’t. Those who die in right standing with God go to Heaven, and those who do not accept His offer of eternal life go to Hell.

5. What is knowledge, and how do people know it? People have empirical awareness. We touch, we smell, we taste, we see, and we hear. Pinch yourself, and chances are you feel and may hear the word ouch. Experience confirms what we come to know. In the spiritual realm, we can pray and recognize the response from God. We are created to know. There are natural artifacts to be discovered and ones made by human hands. The Bible is as much an artifact as the stone wall found in Jerusalem, only it was made by the Spirit, even the breath of God. The Holy Spirit’s tools were not hammer and chisel, but people. Hearing is an important physical way to know things. One can hear a bird and know it is a bird, one can hear the rain and know it is rain, and one can hear God and know it is God.

7. Does human history have value? Human history is the story of God’s interaction with man and how He is going about using all things for the good of those who love Him.

A caveat: Just because we are created in God’s image doesn’t mean we act like God at all or all the time. Even those who try very hard and have some success fall short, and this is why Easter is important. Bloodshed from the body, which was the fullness of God in human form, redeemed us from our sins, mistakes, and accidents. In the Easter worldview, we are all guilty but exonerated by the blood of God. It was necessary for Him to die so that there would be a resurrection, God behaving like God for the benefit of creation! In the Resurrection of Jesus Christ, God the Father has given us re-birth into a living hope… a resurrected and eternal life.

Now then, if we believe:

• God provided a blood sacrifice from Himself,

• His blood has the power to wash away all of our sins,

• His blood was so valuable that it redeemed us from all curses, and a law cannot be satisfied by human efforts and,

• On the last day, we will be resurrected to live an eternal life;

Therefore, we have an Easter Worldview that cannot perish, spoil, or fade.

Emmanuel: God With Us