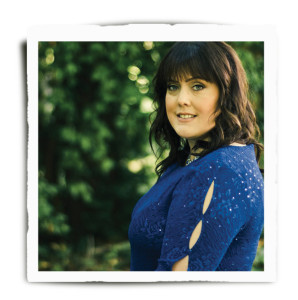 Born in Harrisonburg, VA, Kelly’s family moved to West Virginia when she was only two weeks old. Her father was in a bluegrass band and her grandparents owned a recording studio. She traveled regularly with her family to fairs and festivals and knew at an early age she wanted to pursue a singing career.

Kelly’s dream started with her first ‘job’ in the music industry at age seven. She would help her grandparents in their recording studio in Broadway, VA.

“I thought shrink-wrapping cassette tapes was the biggest thing in the world!” Kelly recalled.

Kelly continued on her journey throughout school. At age nine she started singing in her school choir and continued performing in groups through high school. She remained overcome by stage fright during that time and she would just freeze when on stage by herself.

After a few years, knowing her passion was to sing, Kelly started to compete in local karaoke contests and started getting more comfortable on stage.

“Even though I was nervous, as soon as I would get off the stage I would be like, wow. That was fun. I want to do it again!”

After a couple of years, Kelly officially became a Country/Bluegrass artist and released her first CD titled Ya Wanna Bet in 2001. The title track penned by Coberly, “Ya Wanna Bet,” reached number two on the Country music charts in Australia.

Kelly went on to record the Classics By Request CD, A Country Gospel Christmas CD, and a tribute CD called Remember West Virginia Coal. It was a tribute album for the Sago Mine Tragedy that happened in 2006. She also recorded a Bluegrass CD in 2007 called Bluegrass Express.

When Kelly lived in Tennessee for three years, she worked as a demo singer. One day she went in to record new backup vocals for some tracks. Normally, when she would get a new song to perform, she would review the lyric sheet and listen to the song a couple of times before she would sing it. This time, as she looked at the lyric sheet in front of her, she was floored. The song was “Remember West Virginia Coal,” written by Kirk W. Boland & Wesley Boland.

Kelly told the studio manager, “You are not going to believe this. This song is written about my own hometown. I am from Buckhannon, WV, where the Sago Mine accident happened. That is what this song is about.

“Originally he sang the song and I was only going to do backup vocals but, whenever the writers found out I was from Buckhannon, they wanted it re-recorded with me singing it.”

Kelly moved back to West Virginia in 2008 to concentrate on family and put her career on hold. It was not until 2013 that she would make a move to continue her dream. Doors started opening up again and she started to receive calls asking her to sing in different places.

“I took that as a sign that I needed to start pursuing my music career again. I started booking some shows but something just didn’t feel right. I was like, God what is it? I felt that You wanted me to get back into singing but something just doesn’t feel right. And then it hit me, at about ten o’clock one night, that this just isn’t what I am supposed to be doing–not this genre. As bad as I didn’t want to, I called shows that I had scheduled and cancelled them…that’s when I realized I was being called to start singing Gospel music.”

With no real access to Southern Gospel music in the area, Kelly got a subscription to Sirius XM radio in her car. She would listen intently and write down all the songs she liked and wanted to learn to sing….Read Full Story Here in our Oct-Nov 2015 Issue

KELLY COBERLY – BECAUSE HE LOVED ME

For more information or to contact Kelley you can find her on facebook.com/kellycoberlymusic or at reverbnation.com/kellycoberly. Her new album Because He loved Me is available on Amazon.com.