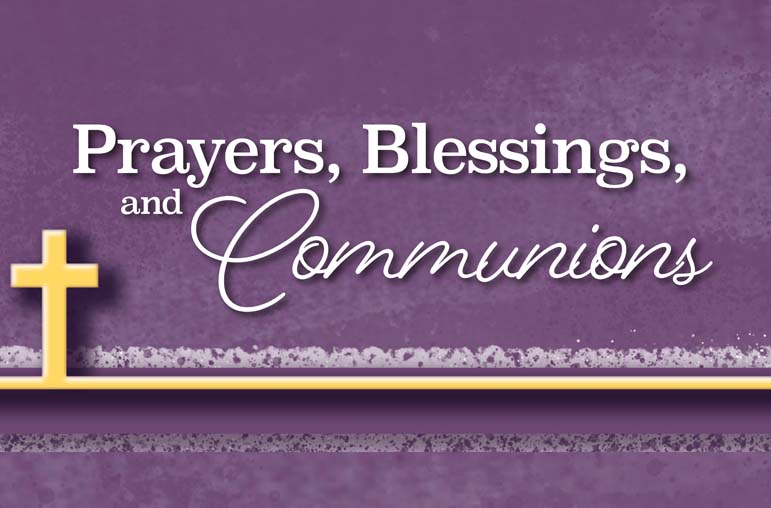 A caveat: humans tend to process ideas on one dimension. Spiritual concepts are eternal; therefore, multi-dimensional. A few words only seed the thought process that will grow unto a fuller understanding. The subject matter of this paper is much broader and richer than the narrative that is offered.

There are three paths of direct spiritual contact available to mankind. Prayers generally emanate from humanity, blessings generally originate from divinity, and communions are interactions between parties. From the very beginning, spiritual awareness has been and is paramount to our existence. These are three different types of spiritual infrastructure that are lumped together as being alike, unless a point is made, and some understanding is applied to the nuances of each. This essay endeavors to describe a few differences in the form and function of prayers, blessings, and communions. These three things are the roads, bridges, and superhighways of eternity.

Prayers normally spring from a need, a request, or a thanksgiving. People often have needs and turn to God for relief. Even those who do not believe will get desperate enough to ask for their creator’s help. A prayer of request also originates from humanity and can be from one of faith on behalf of another in need. A prayer of thanksgiving is a cognitive, sometimes verbal, acknowledgment of God and His goodness. Different types of prayers do dovetail and ripple across the illustrated parameters. This conversation needed to start somewhere since the subject matter is like a bicycle: as you learn to balance, you begin to ride.

Consider some interesting points about prayer. Prayers, being eternal, have no end until they are answered. I am still seeing the prayers of my father for his grandchildren come to pass. A prayer can be used in a wrong way…if one prays for someone to act or behave according to their personal agenda and not the Lord’s, then they are guilty of the dark art of witchcraft. An observation: one should not pray for another unless that person is willing to accept the outcome themselves. Case in point, have you ever witnessed someone ask God to bring fire on another because of objectionable behavior only to see the person who first prayed get lit up first? A prayer of thanksgiving is often a response to another prayer that has been answered.

In John 17
God prays for needs, for requests, and He gave thanks.

“And now, Father, glorify me
in your presence with the glory
I had with you before the
world began.”
John 17:5

Now then, one must broach the point that prayers exclusively emanate from humans. God did pray; however, it was from the needs and requests of His human nature. He did this in the person of Jesus Christ, God with us. The Christmas celebration is based on God coming in the form of a human. So, it was in that form He prayed for needs, He prayed for requests, and He gave thanks.

Blessings can be spoken from a person’s soul; however, they are more like well-wishes. A genuine blessing comes from God. Sometimes God will speak a blessing through a thought, a dream, a vision, a situation, or distinctly from His very mouth. Often God uses a person to speak a blessing when that blessing is significant for a people group and when the blessing has an eternal nature. The person being used is just a mouthpiece or delivery man. A direct word from God into a person’s spirit imparts hope, strength, and faith.

Blessings are not to be bought or sold. In Acts 8, there is a story about a man who tried to purchase the blessing of the Holy Spirit. He wanted the power to heal those who were sick and deliver those who were demon-possessed. This man, named Simon (not the Apostle Simon known as Peter), had a two-fold agenda. He desired the esteem of the community and people in general, and he wanted to make money. The apostles strongly rebuked Simon for acting like a believer but not repenting of personal sin and wicked thoughts. They warned him of eternal judgment.

The opposite of a blessing is a curse. Balak, a king of ancient Jordan, hired a prophet (for whom?) to curse Israel as they approached the Land of Promise. Balaam (Numbers 22-24) was fully persuaded to bless Israel and not curse them. The King and elders insisted that Balaam do this pronouncement, but instead, the nations of Canaan were cursed. Divine Blessings are steadfast and not to be tinkered with.

“May those who bless you
be blessed and those who
curse you be cursed!”
Numbers 24:9 (NIV)

The father’s blessing is a powerful privilege in the Kingdom of God. Unction from heaven is given to fathers to bless and foretell their children’s futures. God the Father blessed Abraham with the promise that his offspring would number more than the stars in heaven and the sand of the seashore. People of the earth would be blessed by Abraham through his offspring. David was blessed with the promise that he would have a descendant who would be the ruler forevermore. Isaac blessed Jacob with the family headship and could not undo it when the eldest son requested that blessing. Jacob blessed the sons of Joseph, first the younger than the elder, at God’s direction even though Joseph objected. A genuine blessing is sovereign and needs to be respected as such. My most precious memory of my daughter’s wedding was speaking a Father’s Blessing as part of the ceremony.

Communions, like prayers and blessings, take different forms and functions. Sometimes, a combination of an image, ceremony, or event prompts a communion. A nativity scene is an example. The most common communion is the Lord’s Supper: the ceremony where bread is broken and consumed, and a bit of wine is consumed in memory of Jesus. The bread represents Christ’s body broken for our healing and provision, while the wine represents the blood covenant God struck with mankind. This is a solemn acknowledgment of God’s blessing of eternal life and a prophetic act that His life must be internalized.

Another form of communion is a simple, quiet time where one settles down to reflect, hear from God, or just soak in His presence. These times of quiet are often the prelude to the ultimate communion, that is, when man and God engage in a two-way conversation. We have the opportunity to do this because God the Son became flesh, bled, died, resurrected, and gave us right standing with God at His cost. What a Blessing!

As the near future collides with eternity, it is good to remember Isaiah’s famous prophecy concerning Messiah.