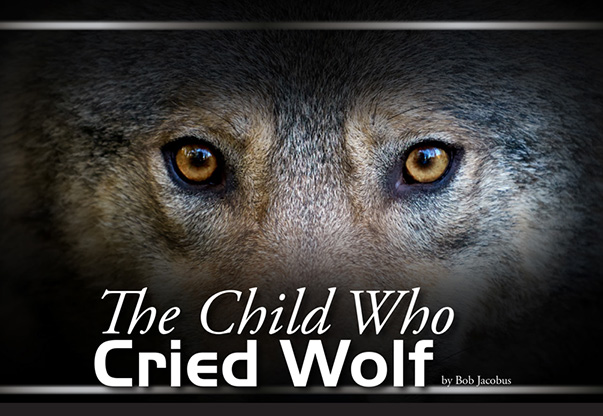 In 1867 a story was published in a collection called Aesop’s Fables.

Aesop didn’t suffer from woke expectations; he just told simple stories to teach important truths like “The Shepherd Boy and The Wolf.” This particular story has many applications in today’s world. Another wolf parable with implicit cautions would be “Little Red Riding Hood.” And the Bible also uses the wolf as a literary instrument to express truth and warning. It is not the purpose of this essay to offend; however, it travels through the valley of the shadow of post-modern correctness. Maybe the truth is good medicine; it most certainly will set you free.

Aesop was born a slave in ancient Greece. He had a natural talent for telling stories to impact the behavior of young people, and his fables have been a useful tool to instill accuracy, integrity, and honesty for 2,700 years. The actual title used the word boy. Being woke-less, Aesop would have scoffed at being accused of racism or sexism. One can almost see the expression on his face as the words, “Say What?” would come out of his mouth. Aesop could probably work up a fine fable to bring clarity to today’s social muddle.

There was once a young shepherd boy who tended his sheep at the foot of a mountain near a dark forest. It was rather lonely for him all day, so he thought upon a plan by which he could get a little company and some excitement. He rushed down towards the village, calling out, “Wolf, wolf,” and the villagers came out to meet him. Some of them stopped with him for a considerable time. This pleased the boy so much that a few days afterward, he tried the same trick, and again the villagers came to his help. But shortly after this, a wolf actually did come out from the forest and began to worry the sheep. The boy, of course, cried out “Wolf, wolf,” still louder than before. But this time, the villagers, who had been fooled twice before, thought the boy was again deceiving them. Nobody stirred to come to his help. So, the wolf made a good meal off the boy’s flock, and when the boy complained, the wise man of the village said:

“A liar will not be believed, even when he speaks the truth.”

In today’s world, one must filter every comment and news story that is printed, broadcasted on airwaves, or shared on social media. The boy in Aesop’s Fable cried wolf enough times when there was no wolf that the community ignored him when the real wolf appeared. It is vital that information critical to personal and national well-being be presented in an accurate, unbiased fashion. If not, there is the danger of an ethical flip. This spinning action has the ability to cause one who cries racism to become a racist. Case in point, the mayor of a major Mid-West city, refuses interviews with white journalists. The mayor will only entertain people of color. This is documented in the public record.

A big bad wolf cry right now is “defund the police.” The problem is innocents are harmed by this rhetoric, and the real wolf is unabated crime. The wolf is having a good meal while the shepherds are secure behind locked gates and enjoy personal bodyguards. The sheepherders are crying, “gun control.” The thing is…guns have no behavior that can be controlled. The cry should be “criminal control.” However, there is little or no real consequence for unacceptable behavior for those who misuse a firearm under the current power structure.

May I cry wolf? “The new Federal Slavery!” A new age of slavery is about to emerge in the United States. Wolf! Wolf! Wolf! CNN and New York Post estimate that upwards of 2 million people will be apprehended entering the United States illegally in 2021. That is more than the population of West Virginia. The number of “non-processed” immigrants adds to the swell. Do open-border immigrants survive by working low-paying, under-the-table jobs? Illegal migrants cannot legally work in the United States, so will the government take care of them, a government that cannot even address the homeless issue of bonafide citizens?  If the government takes care of the migrants, then taxes would be the funding source. Even if the taxes are levied against large businesses, the common citizen will bear the burden of increased costs of goods and services because of the trickle-down effect.

The new picture of slavery is a bit different from the traditional image. Slaves lived to produce for their owners. They received food, water, and shelter. In the new federal slavery paradigm, citizens live to produce for the government. At some point, the tax burden will become unsustainable, and the migrants will have to produce. The new slave class, made up of former middle-class citizens and open border migrants, receives compensation in the form of wages or credits and is “free” to trade them for food, water, and shelter. Unless real measures are taken to manage the border problem and/or plan for the future that we have already created, the 2021 border policies will cascade into a devastated sheep pasture. Good pastures are managed by good fences.

A young girl named Little Red Riding Hood is walking through the woods to visit her grandmother when a wolf appears and asks her destination. “Grandma’s,” she replies, then the wolf says some wildflowers would be a nice gift for Grandma. So, she takes time to pick some. During the distraction, the wolf goes to the grandmother’s house and eats her whole body. The wolf puts on Grandma’s robe and waits for the girl.

Upon seeing Grandma, Little Red Riding Hood thinks that she is a bit strange.

She exclaims, “What a deep voice you have!”

“The better to greet you with,” responds the wolf.

“Wow, what big eyes you have!”

“The better to see you with.”

“What big hands you have!”

“The better to hug you with.”

And finally she says, “What a big mouth you have!”

“The better to eat you with!”

At this point, the wolf sheds the cover, pounces, and devours the girl.

This story has many versions and ethnic flavors, some with miracle outcomes and others with tragic outcomes. Research has pinpointed its origin from the 1st-century Middle East.  The preceding version is a synopsis from the Grimm’s collection told by 10th-century French peasants and first recorded by Egbert of Liege, an 11th-century cathedral schoolmaster.

Today, people are asked for information that, in turn, is used against them. Advice and platforms with sinister agendas abound. If the voice isn’t right, if the eyes are strange, if one hand is used to distract what the other hand is doing, and the mouth is creepy, “run, to the forest, run!”

In nature, wolves are predators–killing machines. They pick out the wounded and weak, the old and the crippled to prey upon. They also like the young and trusting. Wolves have a high social order and establish a brutal leadership order in their pack. When on the prowl, every member acts as one even though the division of labor is evident. They are a powerful and dangerous social entity.

The Bible verse can be accurately interpreted as “Watch out for false leaders.” Not only does it apply to the Church, but it is also a truth that bridges all organizations. A false leader will put on Little Red’s hood and try to deceive by twisting the truth or facts to cover their real purpose. Human wolves tend to fleece the flock, take advantage of weaknesses and ideologic identities. An interesting Red Riding Hood version from the European Dark Ages has the villain as a werewolf, a human that manifests as a wolf when the conditions are right–darkness and the light of a full moon. Interestingly, moonlight is twisted sunlight.

Beware of political factions and their leaders who pit one class of people against another. A clash between social classes ushered in the Marxist/Communist regimes of a century ago. Post-modern politicos and elitists are fostering race division to revive a similar social outcome in today’s free world. Another writer from the past has much to say about the outcome of socialism; George Orwell’s Animal Farm is a poignant tale of social change gone bad.

Now, racism is a wolf, and there are racists in our midst. Many of them are dressed in sheep’s clothing. The people who are misled suffer greater pain from the wolves then from the issue. It is like a knife being twisted in one’s gut. Much pain is self-inflicted because of a diet from the mouth of connivers crying wolf when there really isn’t a wolf. Racism is systemic and exists only because the real issue, sin, is systemic.

When the Good Shepherd is in charge, “There is neither Jew nor Gentile, neither slave nor free, nor is there male and female, for you are all one in Christ Jesus.” (Galatians 3:28, NIV & KJV) Jews are identified as a race, and Gentiles are non-Jewish people, so the Bible teaches there is no distinction of race in the Kingdom of God. Social classes of rich and poor, privileged, and oppressed, do not exist. Gender is not an issue when one identifies in Christ. There is great personal rest when today’s messages are filtered through the lens of living hope. Social wolves, political wolves, and wolves of ignorance will always be with us until God intervenes on the last day. Until then…

Grace and Peace, in and by a personal relationship with Jesus.