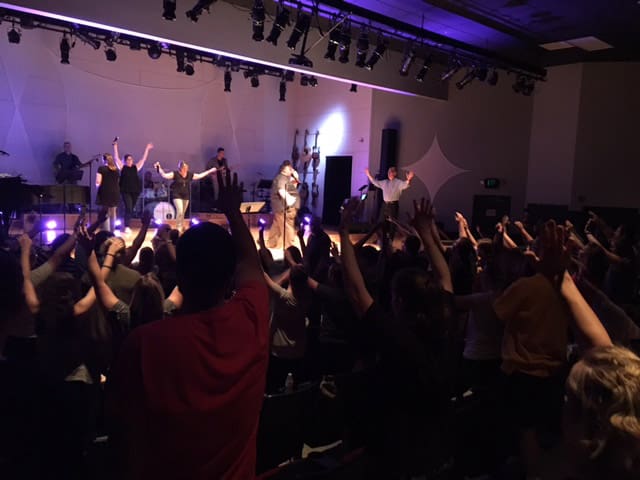 There is no coincidence that West Virginia has the most prophetic moniker out of all 50 states, “Almost Heaven.”

In recent weeks, West Virginia gained attention from national news proclaiming revival in the mountains. We are seeing an outpouring of God’s Glory on the state and the nation.

There are no signs of it slowing down.

Jacob Robinette, Youth Pastor at Mallory Church of God in Man, WV, and Skyler Miller journeyed to Elkins to share their testimonies and what God is doing in the southern coalfields. The Lord led Skyler, after being healed of cancer, to preach in the hallways of Logan High School.

Randy Ellis, Youth Pastor from Summit Church in Elkins, is from Logan County and invited the two to come and speak on Sunday, May 1, at the American Mountain Theater at 5:00 p.m. before the special event called “Downpour: A Night of Worship and Prayer.”

“Some of the things we, including Caleb Hanshaw and Regional Church of God in Delbarton, WV, have seen, is a kid healed from a broken foot and being able to walk, and a girl completely healed from scoliosis. In Logan Middle School a student received healing from colorblindness. Awesome stuff.

“I feel like I am a small part in what God is doing. I just want to humble myself. I want to chase after Him; Jesus is better.”

Skyler was diagnosed with Leukemia when he was a freshman in high school and went through 8 months of chemo. After treatment, he relapsed and had to do another round of chemo that was even stronger along with a bone marrow transplant. Cancer came back again for the third time, but he miraculously was healed! He also got diabetes as a complication of his treatments, but because of his faith in God, he gradually stopped using his medication and knew he no longer needed it. After a checkup with his doctors, they confirmed he had no more diabetes!

“On March 24th, the anniversary of my diagnosis,” Skyler shared, “God told me to preach in the hallways of Logan High School. It wasn’t me. I don’t deserve the glory; it was all Him, I was just a willing vessel to do it. That is what got it started.

“I asked my friends if I could preach to them in the hallway. I gathered some people and others came to see what was going on. God started to see that, and He blessed it. It has spread ever since.

“I have seen people get absolutely on fire, and kids get hungry and step out to start doing God’s work. There is a “boldness” in people that you don’t usually see, and God’s Spirit is being poured out to the whole state of West Virginia.

“It’s just amazing the things that He does.”

She started attending Mallory Church of God in November where they began to pray for revival.

At the beginning of 2016, she dreamed Skyler would preach before a gym full of people where many were coming to get saved.

“It is just crazy to see all these blessings that are coming and seeing my friends stepping out and being so bold,” Grace said.

After the standing room only gathering with Skyler and Jacob, the theater began filling up for the praise and worship event. Over 200 people from many different churches came to worship Jesus.

Pastors Hal & Lisa Boehm welcomed the crowd and prayed over those in attendance declaring it a night to worship the Lord, pray for revival in Elkins, West Virginia, and the Nation.

After a few songs, Youth Pastor Randy Ellis invited Jacob and Skyler to the stage to speak to the crowd and tell about what God has been doing in their area.

Then Hal & Lisa returned to the stage with a replica of George Washington’s “An Appeal To Heaven” flag and spoke about the founders and the importance of knowing how Godly men formed our country.

For more on the history of the flag CLICK HERE.

The worship team, led by Jeremiah Wentz, played with a strong anointing that lasted from the first note to the last note played. Many remained standing in praise during the whole event which lasted around two and a half hours.

About midway through the evening, Randy Ellis invited Jacob and Skyler back to the stage, along with Grace and all the teenagers in attendance, so the trio could pray over them. Then the teenagers were asked to pray for anyone present that is involved in ministry.

Others also spoke of unity in Christ and how the Spirit of God was working to bring about His perfect plan.

In the final moments of the event, every believer was asked to pray over those in need of healing and restoration. The air grew even thicker with the presence of God as those gathered raised His name to the heavens knowing each voice was being heard and answered.

The Breath of God is fanning the spark which began in Logan County by faithful Christians. Believers in the mountains of Elkins, and across the state, know the time is now to stand in faith; to stand with God; to stand in unity as One Church, and bring a revival upon a nation that has lost its way.

Editor’s note: This post originally stated, “The Lord led Skyler, after being healed of cancer, to preach in the hallways of Logan High School, ” Multiple events have occurred in the region which can only be possible through a divine move of God.