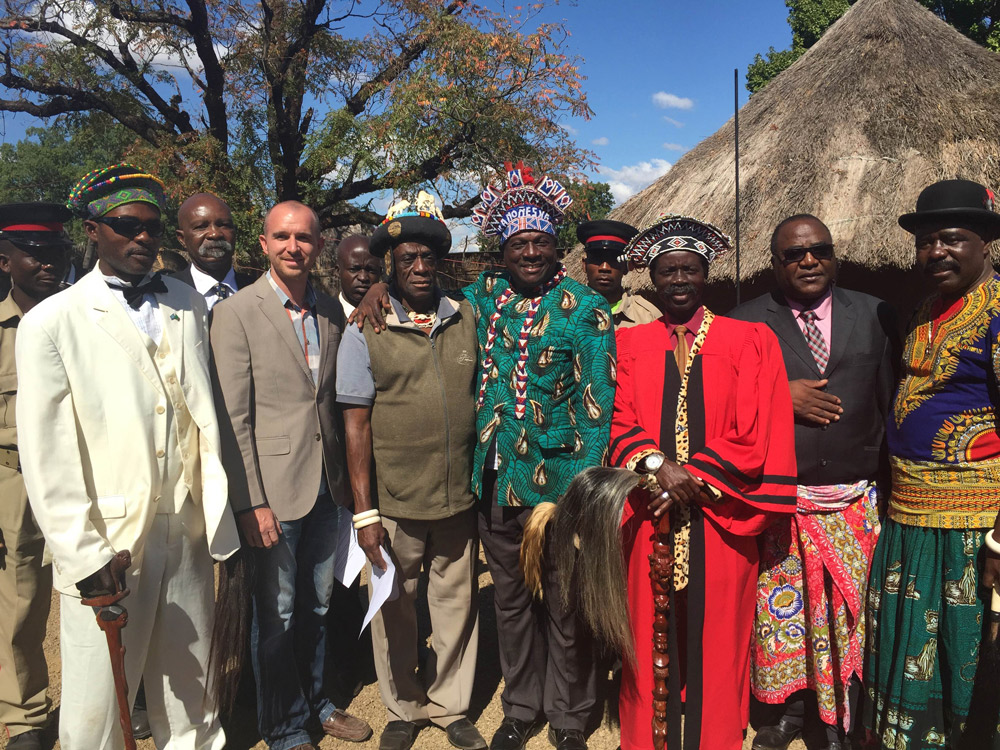 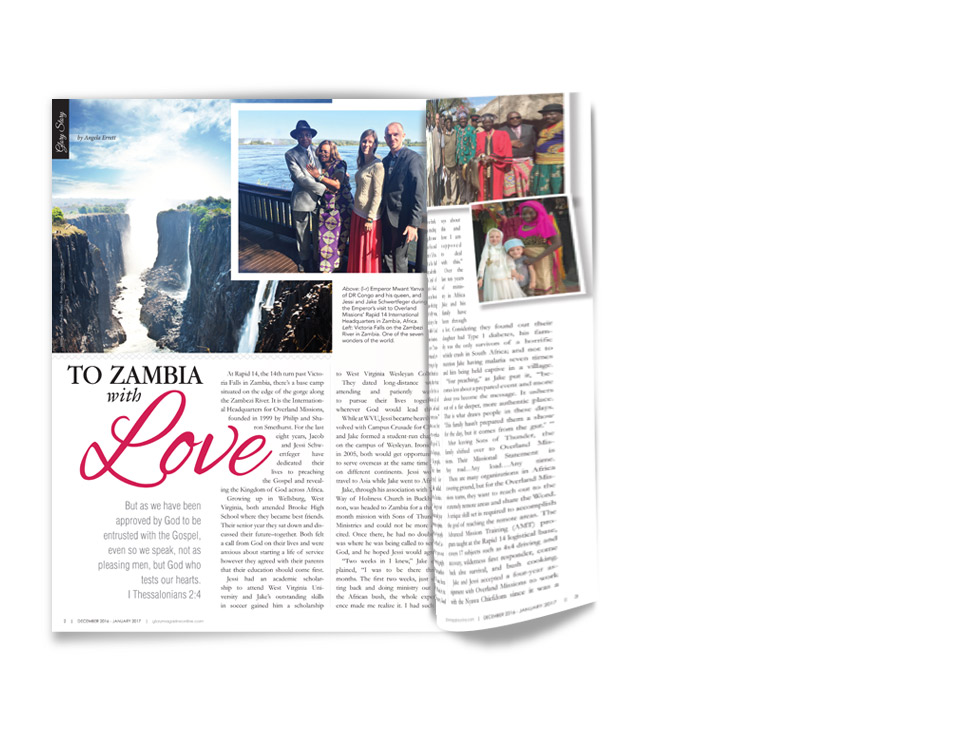 At Rapid 14, the 14th turn past Victoria Falls in Zambia, there’s a base camp situated on the edge of the gorge along the Zambezi River. It is the International Headquarters for Overland Missions, founded in 1999 by Philip and Sharon Smethurst. For the last eight years, Jacob and Jessi Schwertfeger have dedicated their lives to preaching the Gospel and revealing the Kingdom of God across Africa.

Growing up in Wellsburg, West Virginia, both attended Brooke High School where they became best friends. Their senior year they sat down and discussed their future–together. Both felt a call from God on their lives and were anxious about starting a life of service however they agreed with their parents that their education should come first.

They dated long-distance while attending and patiently waited to pursue their lives together–wherever God would lead them.

While at WVU, Jessi became heavily involved with Campus Crusade for Christ and Jake formed a student-run chapter on the campus of Wesleyan. Ironically in 2005, both would get opportunities to serve overseas at the same time but on different continents. Jessi would travel to Asia while Jake went to Africa.

Jake, through his association with The Way of Holiness Church in Buckhannon, was headed to Zambia for a three-month mission with Sons of Thunder Ministries and could not be more excited. Once there, he had no doubt it was where he was being called to serve God, and he hoped Jessi would agree.

“Two weeks in I knew,” Jake explained, “I was to be there three months. The first two weeks, just sitting back and doing ministry out in the African bush, the whole experience made me realize it. I had such a discernment in my spirit that this is home.”

“He called me on a three-way call,” Jessi said. “From Africa, he made a call to America. Then America called China so that we can be connected. He told me, ‘I think this is where we are supposed to be–in Zambia, Africa.’”

Jessi’s commitment to the Lord was always “yes,” so they decided to make a two-year commitment. Jake completed college in 3 years to have a full year to do fundraising to get them in the mission field while Jessi finished at WVU.

Jessi and Jake married after graduation on June 17, 2006, and about six weeks later they boarded an airplane heading to Zambia. Life went from college to marriage, to being in a foreign land in a matter of days.

Embarking on life as a missionary is something every parent has reservations about for their children however it was completely out of the norm for Jessi since she grew up without a culture of missions at home and still had such a desire to serve the Lord.

Obviously, their families were skeptical that it would not last long still they were very supportive of Jake and Jessi and the life they were choosing to undertake. Year after year the questions would be, “Are you done yet? Are you ready to come home?” But they soon realized it was a life-long assignment for them.

Years earlier, Jake’s father Norm felt an unction while he was in college to go to Africa, but his parents told him he needed to finish college first. Once he did, he was called to stay in the states to serve. Now, Norm can watch his son fulfill his call to serve in Africa. Many of the family members have visited over the last eight years and have become a part of the journey.

After the two-year commitment was up, Jessi and Jake then linked up with Overland Missions and have been there ever since. They have built a life and a family that includes three children and many new friends, all while pursuing their passion for reaching remote areas with the Gospel. Jake is now the Director of Operations in Africa and Jessi is Operations Administrator in Africa.

Ten years of life in the field has led Jake on a path to full-heartedly, and without reservation, preach the Gospel of Christ and about the Kingdom of God.

After reading Neil T. Anderson’s book The Bondage Breaker in college and reflecting on his own image and who he really was, without a doubt, Jake knew his identity is “in Christ,” and because of the Word of God he can overcome any trial and any situation.

“Those first two years at Sons of Thunder,” Jake remembered, “the culture and everything is so different; you are trying to figure out how to survive and live life. I think we were growing and understanding that what we had to lean on was the fact that this is who we were in Christ and this was a call of God, clinging to what the Word of God said rather than your immediate circumstances.”

Being newly married it was a lot for them both. Jessi took over the orphanage with 54 children under the age of 5, and both began learning the language, the culture, and to invest in the people.

“The Sons of Thunder farm was a great teaching ground for those first two years,” Jake added.

“In the early days, you have theories. There is no practice behind it. You get out there, and you begin to minister and pray for the sick and deal with demonic spirits.

“I can’t tell you the amount of people that came up for prayer that manifested demons. At that moment your theory goes out the window, as far as this is happening right now, and do you believe you have the authority of Christ in you? You walk away from the situation saying I need to get back in the Word! I need to understand what the Word says about this and how I am supposed to deal with this.”

Over the last ten years of ministry in Africa Jake and his family have been through a lot. Considering they found out their daughter had Type 1 diabetes, his family was the only survivors of a horrific vehicle crash in South Africa; and not to mention Jake having malaria seven times and him being held captive in a village.

“Your preaching,” as Jake put it, “becomes less about a prepared event and more about you become the message. It ushers out of a far deeper, more authentic place. That is what draws people in these days. ‘This family hasn’t prepared them a show for the day, but it comes from the gut.’ ”

After leaving Sons of Thunder, the family shifted over to Overland Missions. Their Missional Statement is Any road…Any load…Any time.

There are many organizations in Africa covering ground, but for the Overland Missions teams, they want to reach out to the extremely remote areas and share the Word. A unique skill set is required to accomplish the goal of reaching the remote areas. The Advanced Mission Training (AMT) program taught at the Rapid 14 logistical base, covers 17 subjects such as 4×4 driving and recovery, wilderness first responder, come back alive survival, and bush cooking.

Jake and Jessi accepted a four-year assignment with Overland Missions to work with the Nyawa Chiefdom since it was a very unreached place. Because of the welcoming culture of the Zambian people, they were able to sit and speak about Jesus Christ and pray for their sick and see people healed. They were so hungry for a move of God that with the simple faith they showed–God did amazing things.

Jake, along with a group of disciples, went to visit a witch doctor in Nyawa and ministered to him for several hours….CONTINUE READING HERE

Top photo from magazine shows a picture of Emperor Mwant Yanva of DR Congo and his queen, and Jessi and Jake Schwertfeger during the Emperor’s visit to Overland Missions’ Rapid 14 International Headquarters in Zambia, Africa. Below is a video of the Emperor’s visit.

Emperor Mwant Yanva Visit to Rapid 14 Base from Overland Missions on Vimeo.

Tour the Rapid 14 Base Camp