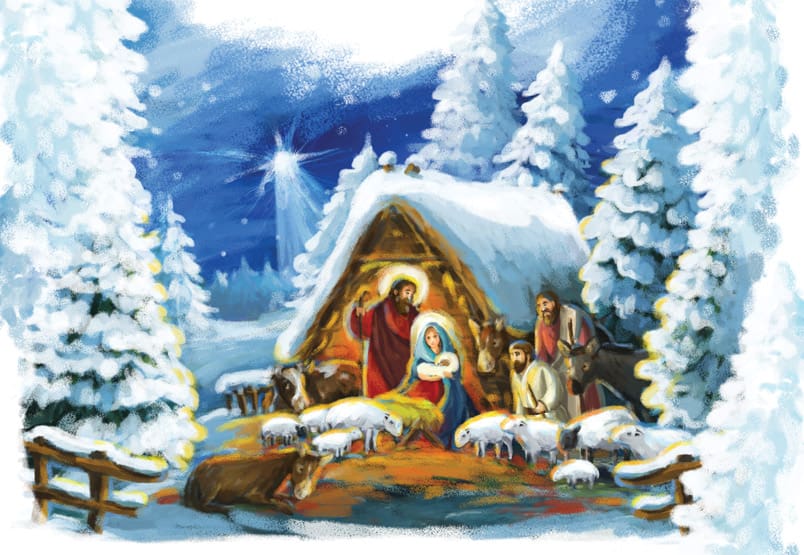 This time every year the world celebrates the birthday of Jesus Christ. Some know what the celebration is about and what it implies, others do not. Believer or non-believer it doesn’t matter; the holiday season is because of Him and not the other way around. The coming of the Messiah has been a promise to the children of men from the beginning. The generations of Abraham have always looked forward to His coming. The advent of Christ is the fulfilled promise Christians have embraced for 2000 years. His second coming is God’s future promise for those who believe. As the world celebrates His first coming, it is important to anticipate His return. For when this event happens, the time of men, as we know it, comes to an end.

We are in a time when humans re-write history, re-state morality, re-define language and blame machines for man’s fallen nature. Today, the simple and profound truth that God entered this world as a human baby competes with the substitute idea of getting and giving. Isn’t it strange that giving usurps the greatest gift as the reason for Christmas? This condition will be with us until the end of the age; don’t let it be troublesome to your spirit. Celebrate His Birth by all means, for He is the King of Glory, worthy of all praise and adoration. This is true whether one truly embraces Him or not.
The first shadow of the promise of Christ was God’s declaration the “Seed of Woman” would bruise the head of the Serpent in the Garden of Eden narrative. This promise was given before any person had been born. The idea of a savior has been around people forever. Another thought-provoking point here, the seed of woman speaks of a virgin birth.

David was promised that his son would sit on Heaven’s Throne forever, the royal scepter never leaving His hand. Just to cover the virgin birth question, Mary was a direct descendant of King David making Jesus the Son of David. Isaiah prophesied of the Messiah in the 8th Century before Christ. The magnificent passage from Isaiah 53 can only describe an everlasting savior. If all this is true, why did the Jews miss his coming? Not all of them did; however, the general populace was not ready to accept God for who He is. Today the general populace is still not ready to accept Him for whom He claims to be even though they celebrate His birth.

For to us a child is born, to us
a son is given and the government
will be on his shoulders And he will be called
Wonderful Counselor, Mighty God,
Everlasting Father, Prince of Peace
Isaiah 53:6

Jews look forward to, and Christians look back to the promised coming of Christ. The children of Abraham can still look forward to the appearing of Messiah, the Champion, the Liberator. Christians can still look towards His second coming, as Champion, Liberator, and King of Glory! The world in which we live is in a fast tailspin and only the sovereignty of God can right things. The time was ripe for the Messiah to appear two centuries ago; the Jews were living under tremendous subjugation. They needed their Messiah. The time is ripe for His return today: hatred, murder, lawlessness, and rebellion run rampant in homes, societies, and government. The thing is we cannot afford to miss Him this time because the fearful “Day of the Lord” will soon follow.

I had a chance conversation with a young adult daughter of Israel several years ago. The Lord had set this conversation up, years in doing so. We had attended different land-grant universities at the same time in the Midwest, both wildlife science majors. Ten years out she was in med school, and I had just finished graduate Bible School. We began talking about the Messiah. She was fully aware of the promise to her people, and I began to share about the fulfilled prophecies in the life of Jesus. You could physically see a light come on when Zechariah 12:10 was brought up.
“And I will pour out on the house of David and the inhabitants of Jerusalem a spirit of grace and supplication. They will look on me, the one they have pierced, and they will mourn for him as one mourns for an only child and grieve bitterly for him as one grieves for a firstborn son.”

I asked what famous Jew was publicly pierced in his side? She exclaimed, “You mean we missed Him?”

We are living in the day that is ripe for the return of Christ, the basis and foundation for Christmas. It is important that we anticipate those things to come. Just as an angel declared to the shepherds near Bethlehem, “Do not be afraid. I bring you good news that will cause great joy for all the people. Today in the town of David a Savior has been born to you; he is the Messiah, the Lord. This will be a sign to you: You will find a baby wrapped in cloths and lying in a manger.” Then angels declared to the disciples after the Lord’s ascension to Heaven that He would come back the same way that He left. His hand is lifted to the trumpets in heaven which will signal all believers to look towards the heavens just as shepherds and wise men looked towards Bethlehem the first time. Indeed, Celebrate His Birth… Anticipate His Coming.